We know some of you leave your Halloween decorations up all year long, so we didn’t want to make you wait any longer for our games!

Here’s the third part of our Things You Didn’t Know About FBorFW Series. Read the first part here, or the second part here.

When you started out, how well were you accepted by the old guard of cartoonists or by the newspaper community? Was there much jealousy or support as you began to succeed?

END_OF_DOCUMENT_TOKEN_TO_BE_REPLACED

This is part two in a series of posts containing “Things You Didn’t Know About FBorFW”, based on some questions we asked Lynn. Read the first post here.

Breaking away from a “gag a day” format in family themed comic strips was, at the time FBorFW started, unique. Was it something your syndicate warned against or was worried about? Dramatic story strips were declining. Were they worried it might hurt the popularity of FBorFW?

END_OF_DOCUMENT_TOKEN_TO_BE_REPLACED

Over the decades of FBorFW’s existence, Lynn has answered hundreds of interview questions about the strip, and her work in general. This got our team wondering if there are interview questions Lynn hasn’t been asked, and what pieces of information about the comic are less widely known. We put together a series of questions we hoped would reveal some things you didn’t know about FBorFW, and Lynn’s answers turned out extremely detailed.

Here’s the first set of Qs and As in the series:

END_OF_DOCUMENT_TOKEN_TO_BE_REPLACED 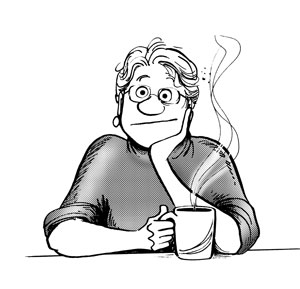 We recently asked the fans on our Facebook page to pose some interview questions for Lynn. Here’s the third set of questions and answers. (Read the first series here, the second set here, and the third set here):

Kate Austin Spina: Would you ever consider a spin off, following April?

Lynn: When a California producer asked about FBorFW as a sit-com, the suggestion was made that April be the focus. She’s at an interesting age, has a garage band, is thinking about becoming a veterinarian…but again, she would have to move from Canada to the US!

In order for a story about the Patterson family to work, a Canadian company would have to be involved. The story is Canadian. April could visit the States, even work there for awhile, but she and her family are Canadian and I want them to stay that way. Realistically, I doubt that there will ever be a continuation of the story – as a live action series or as a comic strip. Some things need to be left as they are. I’m happy to have you design a future for April…let me know what you come up with!

Andrew KIeswetter: Did you ever plan to have Michael marry Martha or Rhetta instead of Deanna?

Lynn: No. I think Michael and Deanna are well suited. I’m hoping their marriage lasts.

Sally Barry: Did Liz hang on, martyr-like, to the ghastly ugly Anthony? I loathed him and was so disappointed she left the great white north and the cute native policeman to go back to white bread land and Anthony’s stache.

Lynn: Yes, Elizabeth married Anthony and I think their marriage will last. Romantic as some relationships appear to be, they are sometimes just part of one’s personal story.

Karen Hiebert: Are there any storylines/characters you regret doing?

Lynn: No. I don’t regret any of the story-lines or the characters I made up. They all fit in. They were all fun to work with. Are there any you wish I hadn’t written about?

Heather McDaniels: Elly’s father was a WWII veteran. If he were with us today, what would his thoughts be of the rise of white supremacy in America, something we, ourselves, are struggling to understand? Would he speak to the children about his time during the war, and might Michael write about it? This is something I wish someone would do, as it’s hard to explain to kids other than “they’re very bad people” & “they’re racists,” and trying to explain that. Thank you.

Lynn: Elly’s father, one of the grandfathers in the strip, was based entirely on my dad, who was a veteran and one of the kindest men I ever knew. His philosophy was “greet everyone as an equal and give everyone a chance”.

His circle of friends was wonderfully diverse. He wanted to experience as much of life as possible through the people he met in his shop. The coffee was always on, and the conversations were always interesting. Because my dad was so unconcerned about peoples’ colour, shape, education, or income, he travelled the world through his friends and he had a million stories to show for it. Dad was a storyteller. You can’t tell stories if you don’t learn about people, and you can’t learn about people if you are afraid to talk to them. It’s fear that keeps us apart. I learned through my dad and through the strip that we are all exactly the same. All of us. That was “the grandfather’s” philosophy–and it’s also mine.

Lynn: I honestly don’t remember. If it was never mentioned in the strip, then I have no idea! Make one up. That’s what I’d do!

Linda Davies: Was there ever a storyline or subject matter that you WANTED to include in your strip but never did?

Lynn: I wanted to do a story about Annie’s husband and his infidelity. I never did. Other stories came into my head instead, and this one sat on the periphery, just simmering away. Perhaps, it was too just too close to home.

Letitia Schuman: How are the kids and grandkids, in real life? BTW I still have the letter you sent me over 20 years ago with your signature which contained your doodle in the middle. Always loved your strips.

Lynn: It’s wonderful that you want to know what’s happening to the FBorFW characters now. The truth is…I don’t know. When the story ended, I stopped connecting with them. I thought I’d be fighting new ideas, wanting to continue, but no ideas came. The story ended…just like that. I wish I could tell you what happened next and how everyone is doing. I have no idea. I want to know if Dorothy in the Wizard of Oz ever got married and had kids and told them about Oz. There are 13 Oz books and I read them all. They ended with Dorothy still a child. Some stories you just have to finish yourself….and perhaps that’s a good thing!

Heather McDaniels: I was wondering if there would be reprints or a collection book of the trio “David, We’re Pregnant,” “Hi, Mom! Hi, Dad!” & “Do They Ever Grow Up?” which chronicled the years between finding out one was expecting & your child turning two/three. I purchased them when I was expecting my first child & got them for a couple of friends who were expecting, but can’t seem to find them anywhere anymore.

Lynn: I don’t think we will be reprinting the original 3 books. They are well out of date, now. I know that folks find them on the internet…in fact, we’ve had to look there, too! I gave so many away, that we only have a few copies ourselves. Good luck, and thanks for asking. Those first 3 little books launched my career. [You can sometimes find them on abebooks.com or ebay. – Ed.]