Over the decades of FBorFW’s existence, Lynn has answered hundreds of interview questions about the strip, and her work in general. This got our team wondering if there are interview questions Lynn hasn’t been asked, and what pieces of information about the comic are less widely known. We put together a series of questions we hoped would reveal some things you didn’t know about FBorFW, and Lynn’s answers turned out extremely detailed.

Here’s the first set of Qs and As in the series:

The names for supporting characters came from various sources. The youngest Patterson family member was called “April” because she was born April 1st—she didn’t actually exist! Connie was my high school art teacher. Deanna is the name of a friend’s eldest daughter. Martha is a writer-friend in North Bay. Phil is my brother’s second name. Georgia was a friend in art school. Annie was a friend in Dundas. Steve and Christopher are my friend Andie’s two sons. Lawrence was for my friend Bernhard’s son…but I spelled it wrong! (Laurence). My dad was named “Mervyn,” a name he hated. I asked him once: if he could choose a name, what would it be, and he said, “Something like Jim,” so Elly’s father was named Jim. The character Shannon was a name chosen by my niece, Stephanie—she wanted to be anonymous.

Other auxiliary character names were chosen because I liked the names or they were short enough to fit into a line of text, or they just came to mind! I did have a lot of fun, however, putting the names of friends on signs, such as grocery and hardware stores. A couple of times I was able to reconnect with old chums, and connect them to their own distant family members because I had put their names in the paper!

Many of the supporting characters were very loosely based on people I knew (or had known in the past) because it’s hard to make up a personality. You really do have to give each character a life and a voice. By connecting an invented character to a real person, I think I gave the people who inhabited the imaginary world of the Pattersons some credibility. Still, there is no one person out there who these characters are totally based on. The main characters resembled our family, might have had similar personalities, body language etc., but they, too, were inventions. We all needed privacy, so the strip did not mirror our lives. 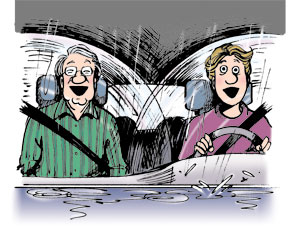 Just one character was created with the actual man in mind; the character “Grandpa Jim” was very much my dad in looks and personality. He died before I had a chance to really get to know him. Through the strip, I was able to reconnect with him on a very spiritual level. I was also able to give him the life he might have lead had he lived longer.

When you began aging the characters, were you worried that the strip might no longer work or that you would lose readers who originally enjoyed the jokes centered around a young family? Did you give a lot of thought to the idea of aging the characters or was it something that just happened naturally as you created the comic strip?

Aging the characters was something I did not plan to do. They just naturally began to grow older. This was because I was unable to do gag-a-day strips. I created situations that required an outcome: “And then what happened?” This gave rise to storylines and lifetime events, which brought the passage of time into the equation. I soon realized the strip was going to be happening in real time.

In order to separate my children from what was going to be a pretty realistic saga, I kept the kids in the strip the same age for 3 years. This gave my real-life children a 3-year head start. They would not be so closely linked to what was seen in the paper. Although everything was made up, readers couldn’t help thinking there was a direct connection. The 3-year gap worked wonders. It also allowed me to see things in retrospect. You can be much more objective when you are looking back and not trying to capture what’s happening “now.” Having the characters in the strip grow and change was a challenge, but it also provided me with much more material to work with.

Elly, over the years of the strip.

I placed the family in southern Ontario for several reasons. One was that readers might connect more readily with a family living in an urban setting. It also separated our real lives from what was seen in the paper.

In reality, we had been living in the far north where a Cessna 185 was our family vehicle. We were used to life in a tiny mining town where everyone knew everyone else. There were stories galore all around us, but these would best be told in a novel and not in a comic strip! Some of our adventures were life changing, and almost life ending! Later, when we moved to North Bay, we were still living a small town life and I had to take my fantasy world far away from my real one.

Millborough was a combination of the towns “Milton” and “Scarborough.” I could create an imaginary Ontario town with the characteristic downtown facades and comfortable surrounding community without having to actually go there and draw the place. 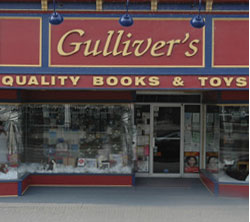 Some buildings seen in FBorFW were drawn from the real thing. A good example was Lilliput’s bookstore.

This was directly based on Gulliver’s Books in North Bay. Suzanne Brooks who owned this beautiful little shop was a good friend, and through her, I learned the inside workings of a real bookstore!

Did you ever consider making the strip set in the United States, as opposed to Canada? Were you ever pressured to make the strip more “American” than Canadian? What do you think the differences would have been if the Pattersons and their community had been “American”?

Before signing the contract with Universal Press, I was pressured by one of the editors to make the strip “American.” He argued that a Canadian strip would not “go over” in the States. I told him I would not sign the contract if that was the case. I asked him, as an editor and a native of Kansas City, Missouri, how well he would be able to write about a family living in downtown New York. He didn’t answer.

After the strip began, I was told by the same editor that I would not be able to use the Canadian spelling for words such as neighbour, racquet and cheque. I said I would continue to spell words the way I had always spelled them, and if an editor in a subscribing newspaper wished to change the spelling, he/she was welcome to do so. Out of 2000 papers, I think only two changed my spelling [although occasionally inconsistencies occured]. Over the years, American readers told me how refreshing it was to be reading about a Canadian family and many told me stories about their visits to Canada and how much they enjoyed our hospitality!

A Canadian flag makes an appearance in Michael’s apartment.