We’re still finding more cool things in our archives, so here’s a new installment of our Deep Dive feature. Hope you like it! 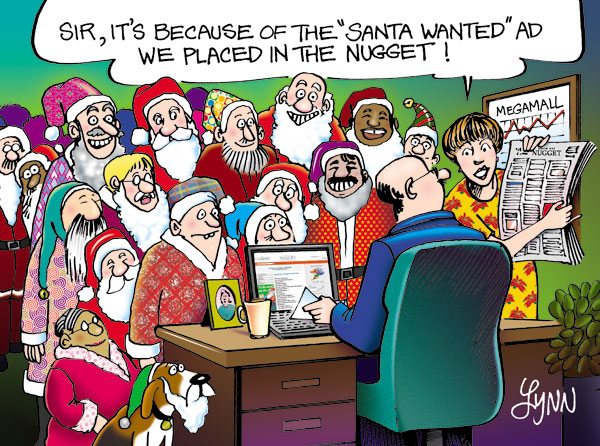 How did you come to do all the North Bay Nugget Christmas cards?

The North Bay Nugget is North Bay’s community newspaper. After moving to the tiny community of Corbeil (just outside of town), I soon got to know the publisher, graphic artist and editors. One year, I was asked if I would create a unique Christmas card for the Nugget to send out to clients and friends. I didn’t want them to pay me, so I did it as a gift. The next year, they asked me to make this an annual commitment and I agreed—in exchange for them printing my personal Christmas cards on their presses. For many years, I produced an original Christmas greeting card for the Nugget and the newspaper printed mine. It was a great exchange, and resulted in some fun and funny images. The card you see above has a lot of different faces—all of which were made up…just random cartoon faces. Even though this was the case, some folks on the newspaper staff insisted I had drawn a caricature of them. 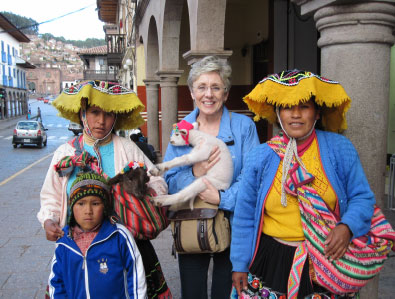 Do you have any reminiscences about Peru?

I had gone to Peru to work with the Medical Missions. As a volunteer, I said I knew enough Spanish to be helpful. When my identification card arrived, it said “translator” on the top, and so I was tossed into learning the language fast and furious, and on the job. Immersion like this gets you close to fluency mighty fast!

On this trip, we were housed in a Christian compound a few miles out of Cuzco. Our job was to work in outreach clinics, providing medical and dental help to people who would otherwise go without. My time was spent between the doctors and dentists, explaining procedures to patients so that they would be well informed, unafraid and cooperative.

The Peruvians are beautiful, funny, helpful and articulate people who welcomed us all with enthusiasm. The best way to really experience a country is to work there—even for a week or two; nothing puts you into the picture like working alongside the locals. This photo was taken in Arequipa en route to Aguas Calientes and Machu Picchu. We were given the weekend to sightsee. Not wanting to shop, I was waiting for some of the other volunteers. This woman, her children, and two new baby goats were standing nearby hoping I would pay them to have a photo taken. Since there was little going on, and business was slow, I had my picture taken and this is it. I have been to Peru several times. I have friends there and will go again. It’s a country that beckons my soul. 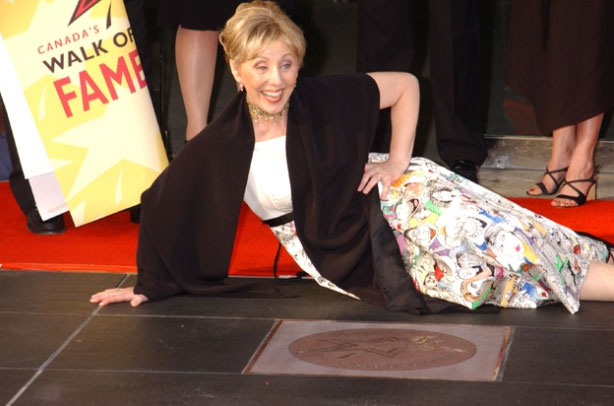 We know the story about you creating your cartoony dress for the Canada’s Walk of Fame gala. How was your induction day for you?

This is the day I got a star on the Walk of Fame in Toronto. It was a wonderful day—full of events and lots of celebrities. When this kind of excitement happens, the day is too overwhelming to absorb the significance. You don’t think about actually being on that walk until much later when you see it in place being walked on!

The interesting thing about the actual star on the day it’s presented is that it doesn’t stay in the place where you are photographed. Your star is placed in a hole in front of the Royal Alex Theatre, you are photographed, the star is removed and the next recipient kneels down and smiles. Your star is not cemented into the sidewalk for some time, so when it’s finally in place, you have to walk around and look for it! Mine is on the dark side of King Street West, not far from skater, Toller Cranston’s. (What a sweet man!) Receiving that star was a tremendous compliment, and I still make an excuse to see it whenever I go to Toronto. 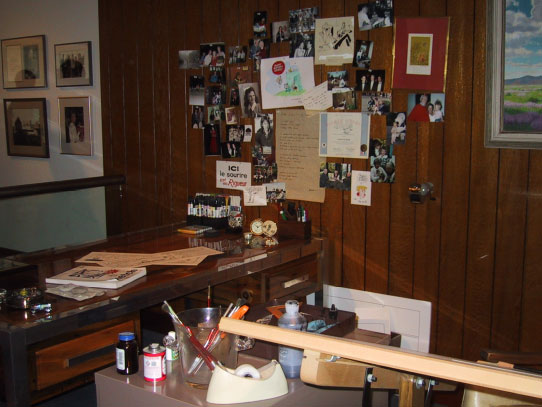 This is the way Charles Schulz’s desk has been set up in the Schulz Museum in Santa Rosa, California. They’ve done a good job, but when I was there, I noticed something missing. One of Sparky’s essential tools was a scrappy-looking paintbrush so full of dried ink that the bristles had congealed into a tight blob. This is the brush he used for all of the large, dark areas he had to fill in. I have an original cartoon he did using this brush.  As I watched him working one day, I said to myself, “If Sparky was gone and the person who cleaned out his studio wasn’t an artist, I bet they would throw that brush away!” The brush is missing from the museum display, so I’m guessing that’s what happened. They say, “one man’s junk is another man’s treasure.” I sure wish I had that brush!! 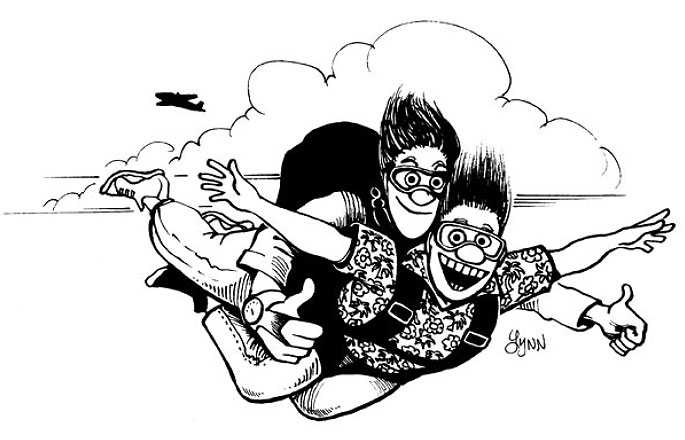 While on the beach in front of our hotel in Cabo San Lucas one year, I watched sky divers, tethered to tourists, come down safely from the sky. I decided it was something I wanted to do. I talked my then-husband and brother-in-law into coming with me. They were not keen. Not wanting me go alone, however, they signed up, too, and the three of us were soon tethered to professional jumpers and were seated one behind the other inside an aircraft—empty of seats and designed for jumpers.

At an altitude of 11 thousand feet, the signal was given, and being the first in line, my guy (Jonathan) and I worked our way to the exit door at the rear of the plane. This was the most awkward part of the process as the harness that connected us (I was in front, the harness clipped to my back and attached to his waist) was heavy and the parachute on Jonathan’s back was large. On my knees, I opened the exit hatch, which was a roller-door that lifted up from the bottom of the doorframe. On the edge of the doorway, the two of us folded into position and got ready to go. Below, the earth looked like a map in an atlas. The sky was clear. We positioned ourselves for a second or two, and then, with arms extended, we pushed forward into the open sky.

It was wonderful. The air, rushing against our bodies, felt like a waterbed: solid and vibrating, but firm. There was no sensation of falling. Everywhere around us was horizon and sky. The feeling of freedom and flying was magical—like nothing I had ever experienced before. We descended like this for what seemed like a long time but was really a few minutes. During this time, we turned 360 degrees and looked out at the ocean, the horizon and Cabo San Lucas with the most incredible ease. The land below us had at first been a blanket of colourful patterns, but soon the patterns became recognizable shapes. White dots became houses, lines became roads, and as soon as there was clear definition, Jonathan pulled the cord.

Suddenly, we bounced into a vertical position swinging easily under the huge parachute canopy. We floated downwards, the beach coming towards us. I curled myself into a ball as instructed. Jonathan, with years of experience, took the landing on his own. Laughing and shouting, we found ourselves rolling on the beach under the bubbling, beautiful canopy of the parachute. “Que padre, no?” he said over and over… “What a father. What a hoot!” It was over far too fast.

My husband and my brother-in-law did not enjoy the fall as much as I did—both needed a stiff drink and to relive the ordeal as if it was a tale of survival. I, on the other hand, was so energized and exhilarated that I signed up to go again! The cartoon you see here was done for Jonathan as a thank you for the ride. It was going to be on a T-shirt; the caption reading, “I jumped, I lived, I loved it!” But the shirt was never made. I still remember this experience as an investment. I’ll never do it again, but I will remember the rush for as long as I live.

How do you feel about Stephan Pastis and other artists taking a poke at the strip?

When another cartoonist spoofs your strip in theirs, it’s a wonderful compliment. This is usually done as a surprise, and is both a gift and a sign of sincere friendship. We have all done spoofs, from time to time, and the interesting thing is, it’s really hard to draw another cartoonist’s characters. You’d think it would be easy, but try to copy someone else’s signature. It takes a lot of practice to do it well. (Not that it’s something I’d encourage…)

Many years ago, Jim Davis (Garfield), his wife, my husband, and I flew to Nassau to visit Jim Unger (Herman). It was a wonderful visit, but we were soon sidetracked by the news that our dear friend Tom Wilson (Ziggy) was very ill and in the hospital and unable to work. We knew he was on deadline, we all were, so we decided we would do a week of Ziggys to give him some time to get better. Writing Ziggy-like material was difficult, but not as hard as drawing Ziggy himself. You’d think that a bubbly little nebbish guy like Ziggy would, for 3 successful cartoonists, be a piece of cake! No so. We all struggled to draw a realistic Ziggy. As I said before, it’s the same as trying to copy someone else’s signature. We did get a few ideas off to Tom’s son and I think he might have used one. For years we talked about drawing Ziggy and how hard it was! Tom Wilson recovered to write and draw his iconic panel for many years afterwards. Tom Jr. creates Ziggy now.