This is part two in a series of posts containing “Things You Didn’t Know About FBorFW”, based on some questions we asked Lynn. Read the first post here.

Breaking away from a “gag a day” format in family themed comic strips was, at the time FBorFW started, unique. Was it something your syndicate warned against or was worried about? Dramatic story strips were declining. Were they worried it might hurt the popularity of FBorFW?

Once I had worked my way past the first year of FBorFW, I was given a very free rein. As long as I didn’t use profanity or draw anything that could be considered inappropriate, my work was left unchanged. I now had a different editor! Lee Salem worked closely with me, giving me direction and helping me to write using fewer words! He checked my grammar and punctuation, and if he didn’t “get” something, I did it over. For my entire career with UPS (Universal Press Syndicate), I was allowed to do what I wanted to do; take my characters and storylines wherever I wanted them to go, which meant they trusted me. This was a real compliment! Serious stories like “Lawrence” and “The death of Farley,” I discussed with Lee well before they were published. I needed his guidance and I enjoyed our collaboration. A good editor is a gift!

Did your editor ever suggest to you to come up with a character or storyline because he or she felt it would boost the popularity of FBorFW, or help your strip get into a different area of North America or country? Was there ever a topic your editor wished you would handle, or a subject they wished you wouldn’t do?

I was never asked to broach any subject or include any information that did not originate with me. We talked about the aging of the characters and how it would affect the “product.” Only one other strip had aged the characters (I believe it was Gasoline Alley). If I was going to do this, it had to be done well. 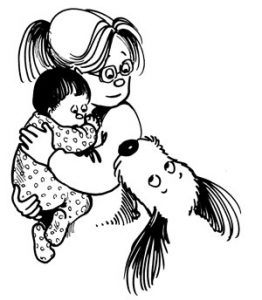 One problem was that changing the look of the characters would be a deterrent to licensing. Advertisers, wanting to use a certain cartoon image, would be frustrated by that characters’ eventual change. For example, when April was “born” there was a possibility of working with “Pampers.” The trouble was that by the time we had worked out a contract and managed a sales campaign, “baby April” would be two years old and not the same character they had hoped to show in their advertising! I decided that working in “real time” was worth the loss of the licensing potential.

Were there any social issues you tackled that you felt were a little hard to do but still felt they were important to address and raise awareness about? Did you ever feel concerned that once you began the more sensitive storylines that you would lose a lot of your core fans?

Once the strip became a sort of living family in real time; once I was trusted to do realistic stories about real topics (such as teenage romance and women in the workplace), I thought I should include some serious situations as well. We all experience difficult, unhappy situations. Lee (who had suggested the title, “For Better or for Worse”) agreed that there were two sides to life, and that I should go ahead and write some truthful stories!

This was an exciting challenge. It was energizing. If the strip became boring to me then it would bore my readers, too, so a good topic was real food for thought. I worked with material that I knew, such as Lawrence’s “coming out story,” and the story about the bullying of a young high school student with special needs. “Shannon” was the voice of my niece who had undergone some serious bullying and had stood up for herself when she’d had enough!

Serious storylines can really add to the guts of your work, however, there is a problem with tackling real life problems in a comic strip format: the strip can become a forum. If you’re not careful, if you don’t choose a subject that works well, you run the risk of sounding like a spokesperson for one cause or another. After I had done a serious story, I would get requests from representatives from various organizations asking that I cover other topics of concern. These suggestions were well intended, but as an entertainment medium, a comic strip must focus on funny and leave the serious stuff for “once in awhile.”

There is competition among cartoonists for sure, but for me, it was mostly between the syndicates vying for space in a very competitive market. I remember overhearing sales reps talking about how Blondie had bumped FBorFW, or how FBorFW had bumped Blondie, but the artists were not involved. This behind-the-scenes rivalry left room for Dean and Charlotte Young (Blondie) and I to become good friends! If Blondie and FBorFW were hoping to take the same space in a rival paper, we didn’t really know about it. 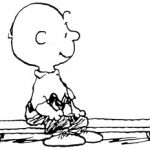 My true competition was with myself. I wanted to be better tomorrow than I was yesterday. I pushed myself hard. If I had another goal, it was to earn Charles Schulz’s approval.

If “Sparky” said he liked my work, I knew I’d hit a homer! Peanuts was my benchmark strip for over 20 years.

Were there other cartoonists you would run ideas by before you wrote and drew them? Did you seek advice from other cartoonists who also did controversial subject matter about some of the storylines and issues you wanted to do? 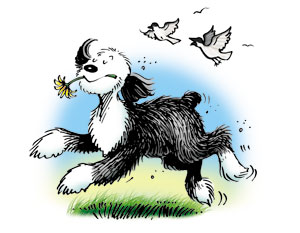 Other than my editor, my family, and Charles Schulz, I did not discuss my storylines with anyone. An interesting story: I told Sparky (Schulz) that I had to bump off Farley the dog. I had no choice. The strip was “in real time,” and the dog was already far too old. I just had to figure out a way to do it. He was furious. He said, “If you kill Farley the dog, I’ll have Snoopy hit by a bus and go to the hospital and nobody will care about your stupid strip!” Yes, he said that, and he was serious.

Because I didn’t want Snoopy to be hit by a bus, I didn’t tell him when I had submitted the story or when it would run. The story went like this: Baby April takes a toy boat down to the river behind the family home. She is not supposed to be out there by herself. Farley bumbles after her and when she falls into the river, he jumps in and holds her head above water until the family arrives. Both are rescued and are safe, but the effort is too much for the old dog and he dies in the arms of daughter Elizabeth. When Sparky saw this in the paper, he called me on the phone. “That stupid little girl!” he shouted. “What was she doing down by the water in the first place?” I couldn’t believe how real he thought the story was and how careless the characters had been. He was genuinely angry!