We recently asked the fans on our Facebook page to pose some interview questions for Lynn. Here’s the second set of questions and answers. (Read the first series here): 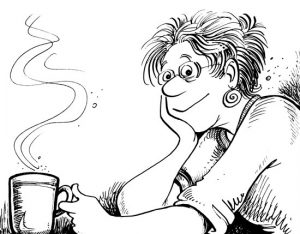 Matt Dodge: Was there a particular character or location you found more difficult to draw than others?

Lynn: Anything that was an establishing shot: what a school looked like, how a road curved, what friends’ houses looked like, workplaces…anything on which I would have to base a series of illustrations was tricky to do.

Zane Andres: How can you have boldly stood your ground against ignorance with stuff like your storyline about Lawrence coming out only for your staff to now censor your work because of the false notion that “people might be offended”?

Lynn: You defend the things you believe in. You do it with confidence and courtesy. In the end most editors were comfortable with the story line, but they had to deal with readers who were not. I was proud of that story.

Nicole Greening: Do you miss the Pattersons?

Lynn: No, I don’t miss the Pattersons. I told their story to the best of my ability and then I had to let them go.

Lynn: I’ve never been happier. Thanks for asking.

Terri Kimble Fullerton: How did you encourage your own kids to explore their creative sides? Any recommended art supplies, activities or resources?

Lynn: When I saw what interested my kids I did encourage them, as all parents do. The best resource for them, as it was for me, was school. Their teachers did for them more than I could ever do, and they did the rest on their own. Art supply stores like “Michaels” give you incentive, just by walking into them! If you have the gift, you find what you need and you play with it. Guidance comes from outside, but creativity comes from you.

Jim Inman Jr: You’ve been very honest in your writing and creations about the ups and downs of life. Has FBoFW ever been used in some type of psychology experiment or study?

Lynn: Sure. FBorFW has been used to teach ESL [English as a Second Language] – comic art is a great help to new Canadians. It’s a glimpse into North American society and our every day use of the language. The Lawrence story was the catalyst for discussion in schools and churches as were other story lines. For a cartoonist, this is always a real compliment.

Jim Inman Jr: What was the best compliment you ever received from a strip reader? What about from one of your peers?

Lynn: The best compliments are when people tell you that you’re saying what others feel, and that you lightened someone’s day. My peers never had to say anything. We all knew what we were capable of; we knew we had a gift. Like musicians, we worked as a whole, each understanding the other, connected through a kinship that’s rare. Their genuine friendship was and is compliment enough!

P Shane McAfee: I wrote about you on my blog several years ago and you sent a very kind email in response. First of all, thank you for taking the time to do so. Secondly, I referred to you as a Canadian Erma Bombeck. Having said that, who influences your work (aside from your family)?

Lynn: Thank you. I met Erma Bombeck once. We sat side by side at a cocktail party. There was a large book on the coffee table in front of us and a photo of mother Theresa was on the cover. Erma looked at the photo and said: “She needs moisturizer”. I’m still laughing. Many people have influenced my work in that they have kept me confident, knowing I was not alone in my need to be the “class clown”.

Erma Bombeck was one, Phyllis Diller was another and so was Robin Williams. I had the great pleasure of meeting all three. From cartoonists to writers to comedians, I have met most of my comedy heroes. How lucky is that! All of them have influenced me in one way or another.