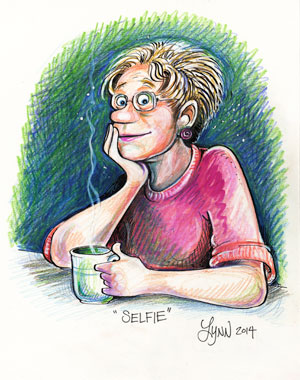 We recently asked the fans on our Facebook page to pose some interview questions for Lynn. Here’s the first round of questions and answers:

Lynn: I don’t miss Farley…I can bring him back to life with the stroke of a pen!

Éric Irizarry García: I was introduced to her work thanks to the specials crafted by Lacewood Productions in the early 90s when they aired here in Spain. So my question is simple: which of the—I believe six—did she find particularly enjoyable, as the author of the work on which it was based? Ah, Lacewood gave me so many treasured memories. I wonder where most of their works have gone..

Lee Williams Commented: As Co-Director of #6 with her…hope she says A Storm in April ?

Lynn: I think The Last Camping Trip was my favourite because it was based on an actual camping trip we took as a family when I was a child.

Lee! Great to hear from you. A Storm in April was a good one, thanks to the crew who worked on the show. You are certainly my favourite Co-Director!

[Ed.: you can get our Lacewood specials online here!]

The Christmas Angel was also a story that appeared in the comic strip and I think it worked best as a strip. What I regret is my insistence on having a tune in every show…I think the Christmas Angel song (Elizabeth dancing with the woman in the woods) could have been better.

I think Lacewood lives on under a different name. These companies tend to change hands or become absorbed into other companies. Lee…can you answer this one?

Shanna Smith: How do you overcome story block? Since it’s a full story that continues over the years, versus one-offs, were story ideas written way ahead or were there moments of writer’s/artist block that you had to overcome? How did you do it?

Lynn: Writer’s block affects everyone who writes for a living. If writing was easy then everyone would do it! Having faith in your own ability helps. Being well ahead of your deadlines makes the blank days work in your favour by allowing you to sit and contemplate the characters, what they are doing, how a “real” situation might pan out…A professional writer uses these times to research and reflect. Then, the ideas might come at 2:00am!

Ken Gabora: After so many years, would we be able to get a “What are they doing now?” Of the Patterson family? Like a limited run?

Lynn: I did a fast overview of the Pattersons’ future plans when I ended the strip. I confess, I haven’t looked at them to see what they are doing now. I think I just needed to let them go. What I enjoy most is looking at my old stuff. There were some good ideas flowing and at the time, I was so busy doing the work, running a home and playing “Lynn Johnston” that I didn’t really appreciate my own ideas! I look back now and wonder how I came up with some of them.

David Pearce: Are there any characters you wish you had concentrated on more outside of the Patterson family? What would you have done with these characters if you had had the time and space?

Lynn: I wish I’d had more time to develop the character “Candace”. I think she had real potential!