Early in the spring, I received an email from a Public Affairs Counsellor at the Canadian Embassy in Washington, DC asking if I would consider having a display of my work at the embassy. I was speechless!

From my seat at the drafting table now, I felt that my time as a syndicated cartoonist was past—that the work I did is safely in the archives and that public interest in FBorFW was over. I was wrong. With the help of the folks at the Canadian Embassy, the Art Gallery of Sudbury, and my crew here at the studio, work was assembled, information was sent out, a show was created, and on September 12th, Paul and I attended the grand opening in Washington. It was a beautiful exhibition and it had all happened so fast.

One of the things I didn’t expect was that several good friends living within commuting distance of the city were able to attend, so it was a reunion with cartoonists, as well as an opportunity to meet and thank the wonderful folks at the embassy who had worked so hard to put the show together. What an honour.

The embassy gallery is not a large space, but it is tall! A mezzanine floor creates a series of large, high white walls onto which they had placed a series of giant, coloured prints of my characters, which looked out over the display below. It was an impressive sight. I stood on a podium in the foyer where folks were enjoying canapés and drinks and I managed to thank everyone…although, anything I said felt inadequate. It had taken me awhile to realize this was really happening, and that we were really there! 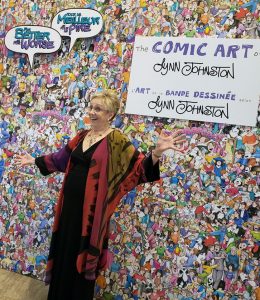 Lynn at the opening of her gallery show 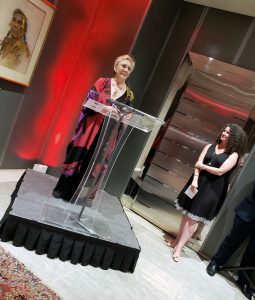 Speaking at the Canadian Embassy 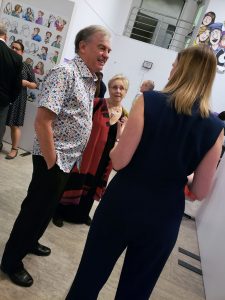 At the gallery opening 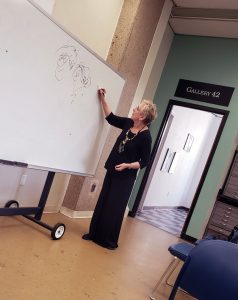 Lynn speaking at the University of DC

While we were in Washington, I was asked to give a talk to a group of university students in the graphic arts program at the University of DC. Rather than lecture them, I asked them to inform me! In this technical age of electronic media, where does a new graduate go to find a job? They didn’t know. It was an interesting encounter because we all had ideas and information. In this changing world, some things stay the same.

I said (as a business owner looking to hire a new artist) I had been hoping someone would just come to me with a folio. It had not occurred to the students that making appointments and going door to door might be a good idea. It’s OK to see someone’s work online, but I want to meet people face to face. I’m more interested in an artist as a workmate than I am in their folio! In fact, I’d rather train someone with an average folio than hire a top-notch artist with an attitude! It was a fun talk, and we all enjoyed the banter.

I also had the opportunity to give a “Chalk Talk” at the Library of Congress. This was another honour, and even though I’m used to public speaking and have done this many times before, I was terribly nervous. The group was small and welcoming, and the talk went well. It was recorded, so I have decided that it was my last. No more public speaking! 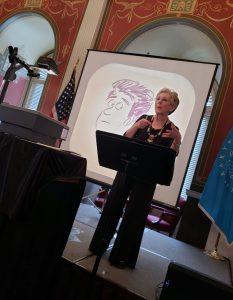 Speaking at the Library of Congress 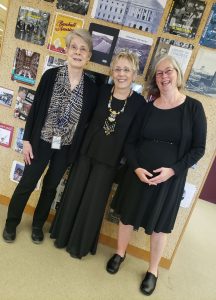 Thanks to the Library staff for their excellent hospitality! 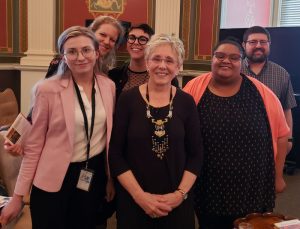 While I was doing this talk, I encouraged Paul to go to the Arlington Cemetery where a dear friend of his is buried—he was a Vietnam vet and a member of Paul’s band for many years. He was buried there with full honours. Paul had been unable to go to the funeral, and this was the perfect time to remember a guy about whom he speaks of lovingly and often. It was a good idea. It took awhile to locate the grave, but as he stood there, a military funeral began; a ceremony much like the one that had celebrated his friend’s life. Paul was there to see it and experience the significance and solemnity of it all. It was a pilgrimage that was long overdue.

After our time in Washington, we took the train to Baltimore to spend some time with my cartoonist friend Barbara Dale, whose “Dale Cards” are well known and wonderfully funny. We continued on to NY where we met with a fine crew of talented animators (Greg Ford Animation) who are presently creating a series of short animated “Giphys” for us, as part of our 40th Anniversary celebration. FBorFW is 40 years old this year!

We continued on to Long Island to see Bunny Hoest and John Reiner, who created the Lockhorns. Bunny invited a group of friends to her home for lunch and we had another fine reunion. As we get older, it’s becoming more important for us old farts to get together at each others’ homes, rather than at the Reuben awards where the chaos and the events make it hard to find a quiet corner where we can catch up. For almost an hour, I sat with John Reiner and Mort Drucker talking about the “acting” that goes into caricature, and how essential it is to see your subject in motion. A still photograph just doesn’t give you the subtle nuances of expression and the body language necessary when trying to capture someone’s “self”. It was a conversation I will cherish. Mort hasn’t been well and no longer travels.

That’s about it! We returned home in a daze of reflection. We had been to the Canadian Embassy in Washington for the opening of a show of my work (still hard to believe!), and we had visited with the dearest of friends. How fortunate we are to be able to do this. How lucky as well. We have much to be thankful for.