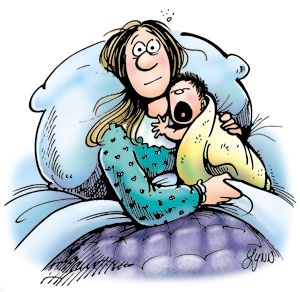 I had been working on the strip for some time and the Patterson family was beginning to grow up—away from the baby days, where kids learning how to walk and eat and talk made writing and drawing the comic strip so much fun.

I often talked to other cartoonists when I was working out a problem, and I happened to tell Cathy Guisewite (Creator of “Cathy“) about losing some of my comic material.

“Why can’t Elly have another baby?” she asked.

“Because I don’t have a third child!” I replied.

This caught me offguard. I never thought about adding a child to a strip that was, in many ways, autobiographical. The wonderful thing about making up a baby was that she would not be based on anyone. She would be entirely fictional, and as such, I’d be free to write about anything and it would not reflect on my own children. Even though I made up all the stories I wrote, my son, Aaron, was closely associated with Michael. Katie was, in many ways, Elizabeth—but a third child would be completely separate. I would not have to consider feelings, or teasing at school, or comments from friends. I’d be free to work with this new character without reservation.

Elly’s pregnancy was interesting. Because I had to show the character slowly changing shape, I worked with my doc and some good books to make her 9-month expectancy believable. I actually felt pregnant myself as I wrote and drew about her “gestation period!” As her due date drew near, I began to have input from childbirth professionals telling me that Elly should have a home birth, or that she should have a standard hospital birth. There were two camps here, both telling me how they wanted to see the event unfold.

My obstetrician and good friend, Murray Enkin,  (the man who helped me publish my first book) was an advocate for home birth. He encouraged people to work with midwives, saying that childbirth was a natural process, and unless the mom was in danger, home was the best place to deliver a baby. Many readers disagreed.

With a bit of a dilemma on my hands, I worked out a compromise: Elly, who is planning a hospital birth, is stuck at home during a snowstorm. Her neighbours (one of whom was a nurse) come to help deliver the baby. A hospital-bound mom has a home birth after all. I covered both bases. 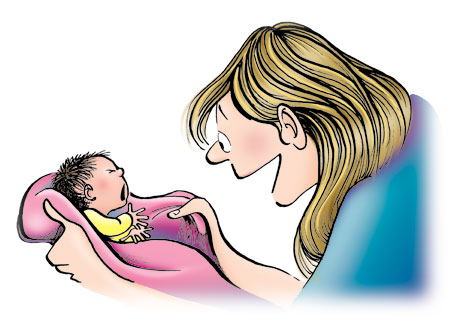 Then, I got to enjoy the fun of having a new baby to write about. The new little Patterson was named April because she was born on April 1st (affirming that she was a made-up character). She became a favourite to draw and to work with. April added so much fun and interest to the strip that I often wondered why I hadn’t thought to make up a new baby myself! I will always thank Cathy (whose lovely daughter, Ivy, is about to get married) for the suggestion. She and I both agree…a made-up kid is much easier to “bring up” than a real one!

Friends in North Bay decided to give me a surprise baby shower when April was “born.” As I drove into my yard, there in the field were several signs welcoming the new baby into the family! 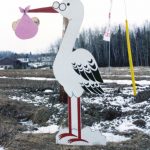 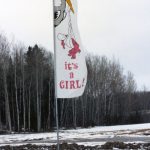 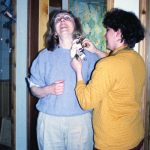 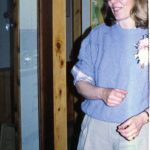