I decided yesterday morning that this was going to be a productive day. I checked out the closet for cool and attractive work duds. I put them on. I painted my chops, arranged my coif, and bumbled into the kitchen. These stay-at-home measures would not deter me from doing stuff. Not today. My partner, Paul—who has set up a small recording studio in the storage room—emerged from downstairs and said “Ahhh…all dressed up and nowhere to go!” And he was right. But, going nowhere is fine. I have been going nowhere for weeks now. In fact, as a cartoonist, I’ve stayed pretty close to home for most of my working life, so this is doable. I just have to be in the right mood. 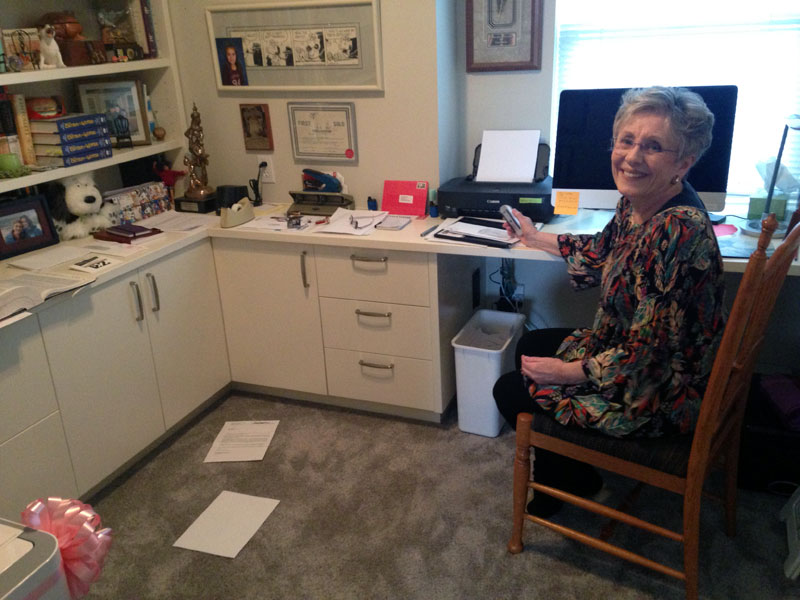 Lynn in her home office.

Looking good, I sat down in my small office space and prepared to write the best article I have ever written for the site. I was on a roll. The words flowed. Folks my age have seen something like this before…I smiled at my own cleverness as I described my childhood memories of impending doom. Listening to the air raid sirens in the park and being told to hide under my school desk. Watching the NORAD sign on our black and white TV as a nasally-voiced authoritarian warned us to be vigilant and prepare for, well…our imaginations ran wild. Some folks were digging shelters and fighting with once-friendly neighbours who asked if there was room (should the bombs fall) for their kids, too. My folks talked about rationing and hoarding, and what would happen if they couldn’t work.

As kids, we were afraid, then—but there was always music and laughter and friends who looked on the good side. Life went on even as the news became more and more threatening. Eventually post-war politics evened out and the sirens were removed or left in the parks as a reminder of a time gone by. For the most part, the fear and the panic had brought our neighbourhoods closer together.

I wrote about all kinds of stuff. Man, it was a truly great article. I was just about to end with a list of comedians I thought folks might enjoy when my screen went blank and everything disappeared. How does this happen? What did I touch? Where did it go? Together, Paul and I tried everything we could think of. We went to advice sites and help lines and then gave up. This is when a margarita makes sense. Or a good cup of tea. I chose the marg, and stewed for the rest of the morning. By noon, I had lost the coif, removed the attractive attire and melted into my TV couch with a bowl of nuts and a bag of Doritos; these things are still available. So much for productivity. *sigh* Technology is wonderful until it sucks.

So here I am the next day, nursing something that might have margarita undertones. I’m in less-than-stunning attire and thinking not-so-profound thoughts…but the incentive is still there to say hello and thank you to everyone who still reads my work and still enjoys it. Stay safe and sane. Love your kids. Write to friends. Call them. I’ve had some amazing conversations lately with folks I should call more often. Cook stuff you haven’t cooked before. Watch comedy! The comedians I’ve turned to are: Ron James, Danny Bhoy, Kathleen Madigan, and Lewis Black. I’ve watched Gaffigan and Carlin and Seinfeld and “The Debaters” on CBC. Thank heavens for the people who poke fun at life and love, and all the stuff we worry about. This time will be analyzed, criticized, eulogized, and studied for years to come. This world will change because of COVID-19. We will all be changed and our children today will tell their children that they were here when it happened, they were part of it all. Take good care of yourselves. We need each other—and that sudden reality, in the end, is a gift.