The last week of September saw me heading off to Columbus, Ohio, where I was a guest speaker and panelist at CXC: Cartoon Crossroads Columbus. They had asked me to give a talk, and take part in a panel.

CXC is more than a gathering of comic art fans; it’s where artists, publishers and collectors go to meet each other and to learn more about the industry. The Billy Ireland Cartoon Library & Museum, located within Ohio State University, has one of the biggest and most important collections of original comic art, books, films, letters, and related documents in the world. In this fairly new museum building, made possible through the generosity of the Ireland family and supported by many others, much of the weekend event took place. Other meetings and presentations took place in the Wexner Centre, another of the spectacular, classic buildings on the Ohio State University Campus. 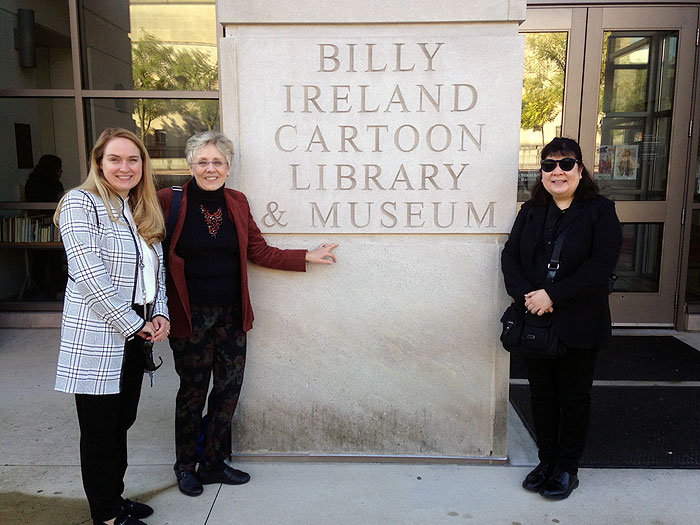 Above: (L to R) Jenny Robb (curator), me, and Annie Koyama (publisher). Annie had just donated an enormous collection of original comic art to the museum. 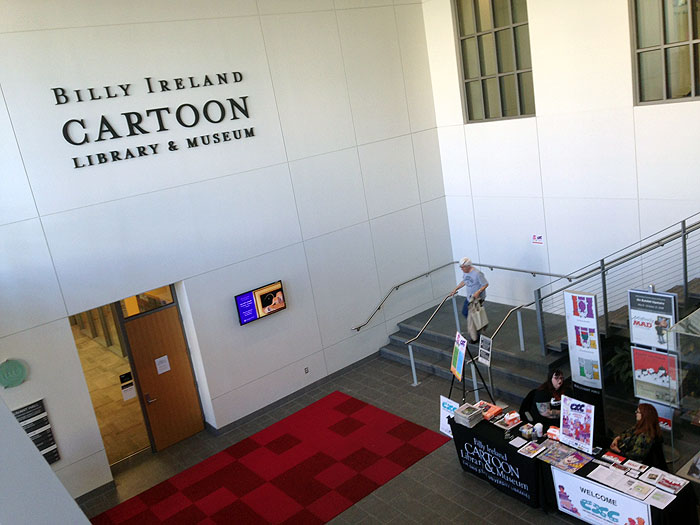 Looking over the railing into the entrance of the Billy Ireland Cartoon Library & Museum. 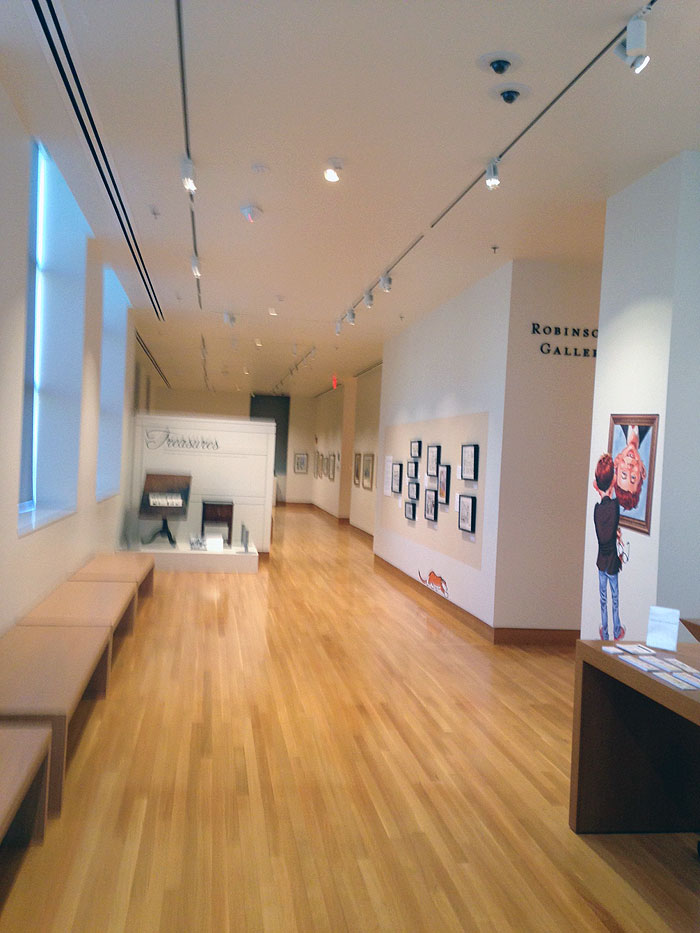 Looking down the corridor towards the first exhibits.

Years ago, the museum was in two classrooms in the Journalism building. In 1989, they moved to the space in the basement of the Wexner Center, where the museum remained for many years.

Every three years or so, cartoonists would assemble in the small rooms made available to us to hear lectures from other cartoonists, publishers, writers, and professionals of all kinds who enlightened us on subjects such as reading contracts, dealing with our finances, and the law. Attending these seminars was an academic experience–a necessary education specific to the business of producing, publishing and creating comic art.

We owed our education to Lucy Caswell, the inexhaustible and determined curator of the museum. Petite, attractive, funny, and serious about our work, Lucy had become a familiar and welcome face at all of the comic art events. Cartoonists everywhere regarded her as an advocate, a resource, and an ally. It was evident that if our original art was going to be preserved and respected for research and display, Lucy was the one to do it. We admired and trusted her. Over the years, we all contributed our work to the Ohio State collection, and with the museum too full to exist as it was, a new facility was built in 2013. Lucy saw the Billy Ireland Cartoon Library & Museum open, just before her retirement. For all of us and especially for Lucy Caswell, it was a dream come true. Going into the Billy Ireland Cartoon Library & Museum for the first time, I was impressed by the design, the space, and the welcoming environment. I was thrilled to see it–at last. 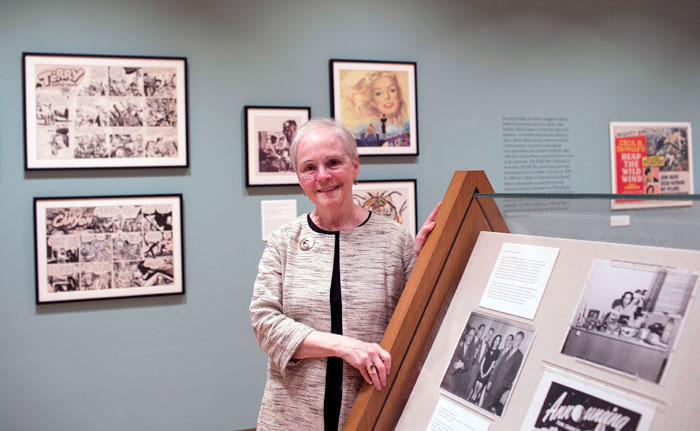 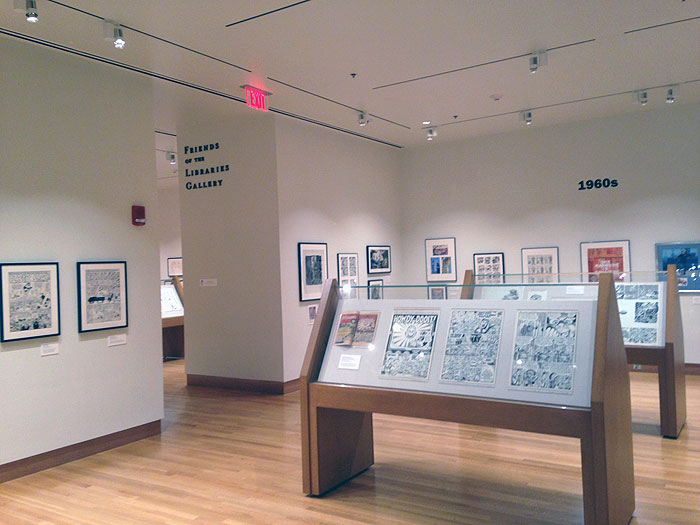 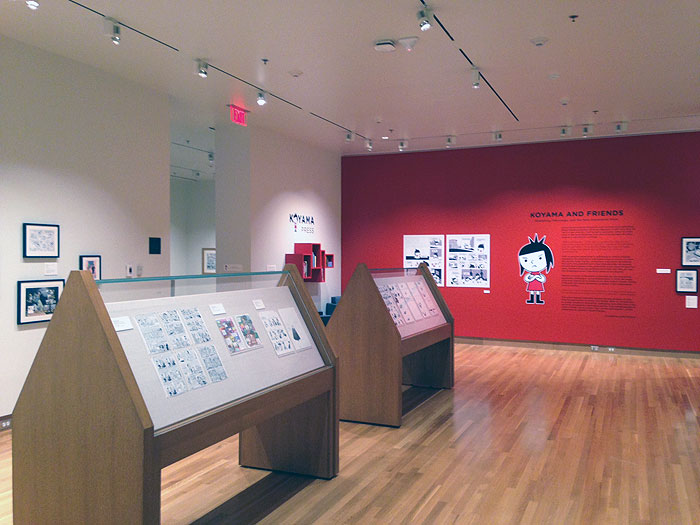 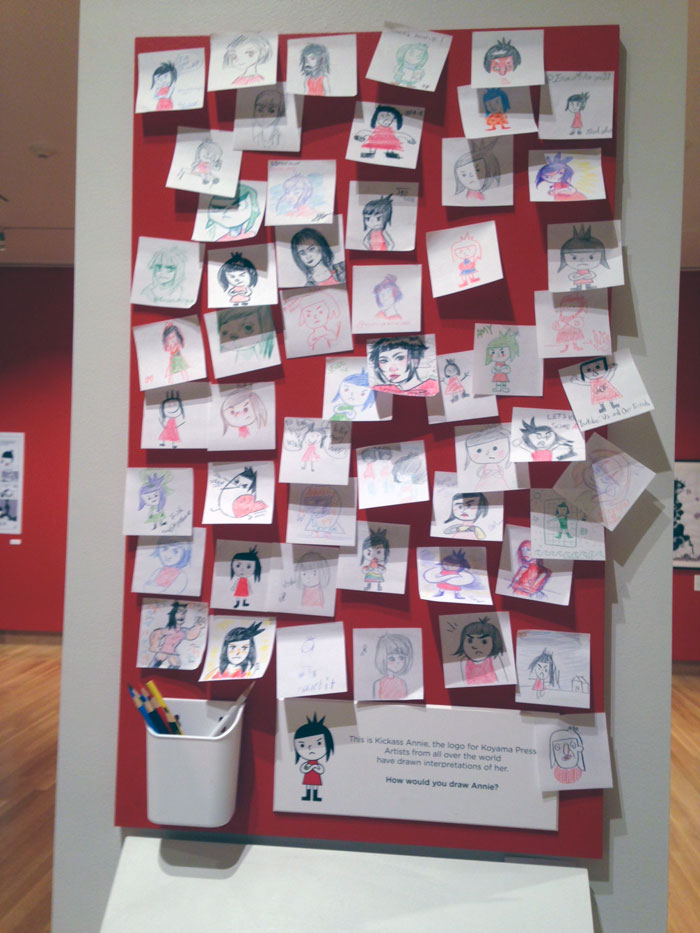 A wall of “Annie” cartoons done for fun by visiting artists.

There is so much in this gallery, it would take a few days to see it all. Seeing the entire collection, however, would take more than a lifetime! 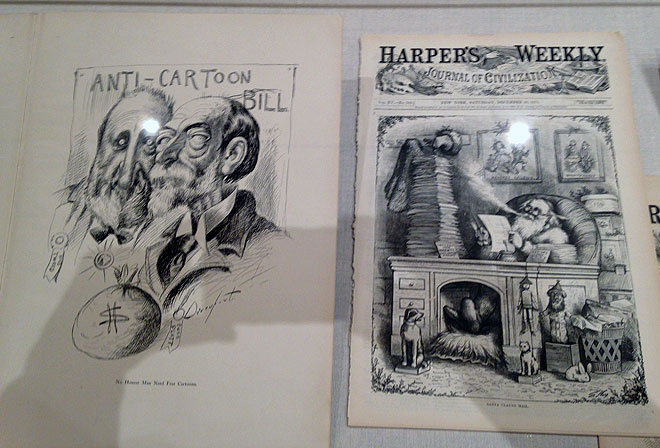 Beautiful engravings for publication during the 1800s. 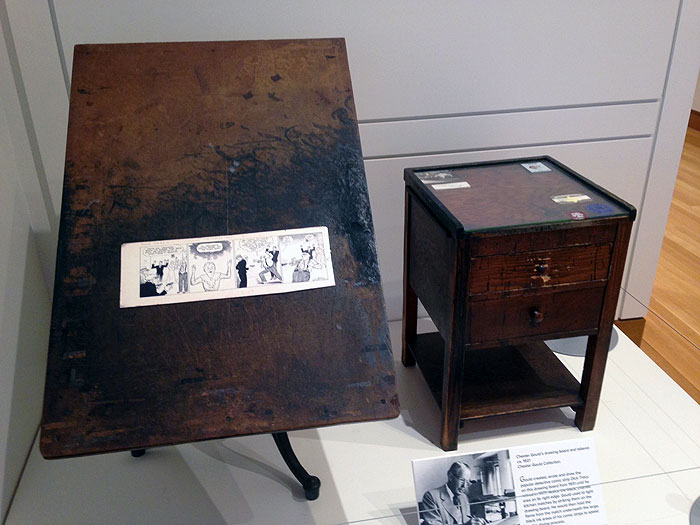 Chester Gould’s drafting table and side desk (taboré). Chester Gould created and drew the incredible “Dick Tracey.” I was surprised to see how small his drafting table was. The black smudges on it proved not to be stains from smoking, which I expected, but scorch marks from where he warmed his artwork by holding matches over it in order to dry the ink. 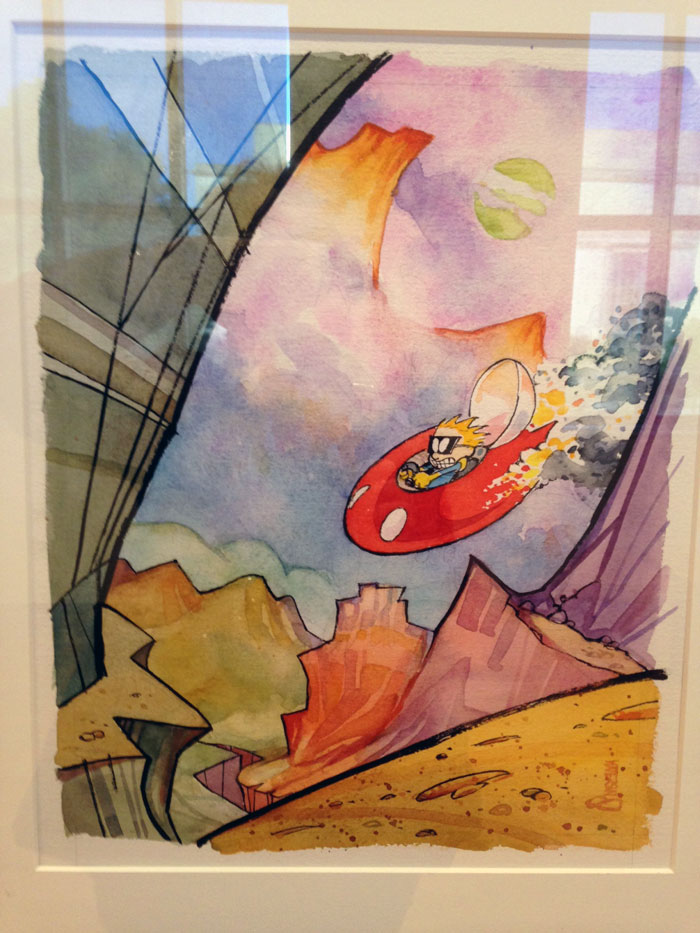 A hand coloured original by Bill Watterson, the creator of “Calvin and Hobbes.” Bill gave away very little of his original art. What he did part with, he hand coloured with a fine, professional watercolour style that blew my socks off!

The actual archives are protected by the most sophisticated electronics which govern everything from humidity to temperature and entry. 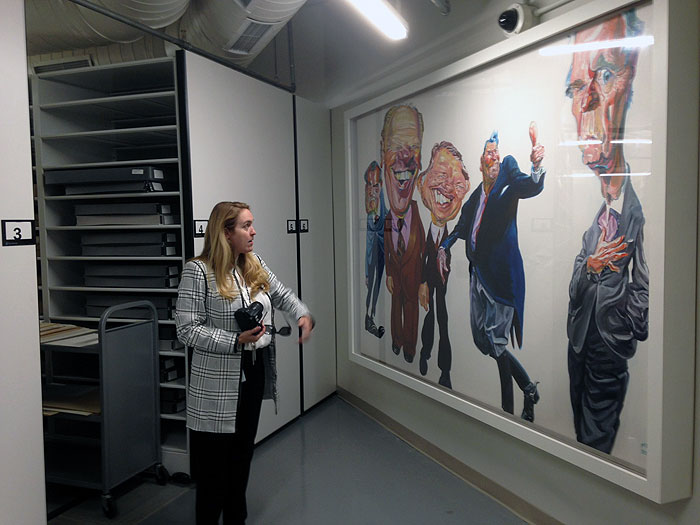 This is the area where the most valuable pieces are kept. This original mural was donated by Garry Trudeau. It’s called “The Presidents” by Philip Burke. 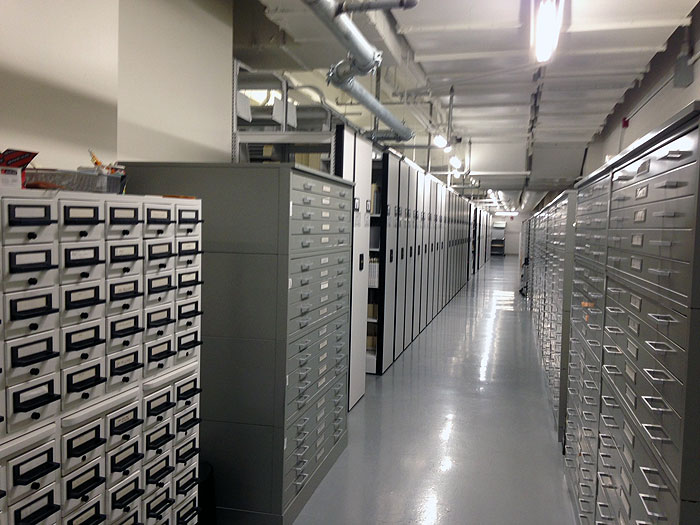 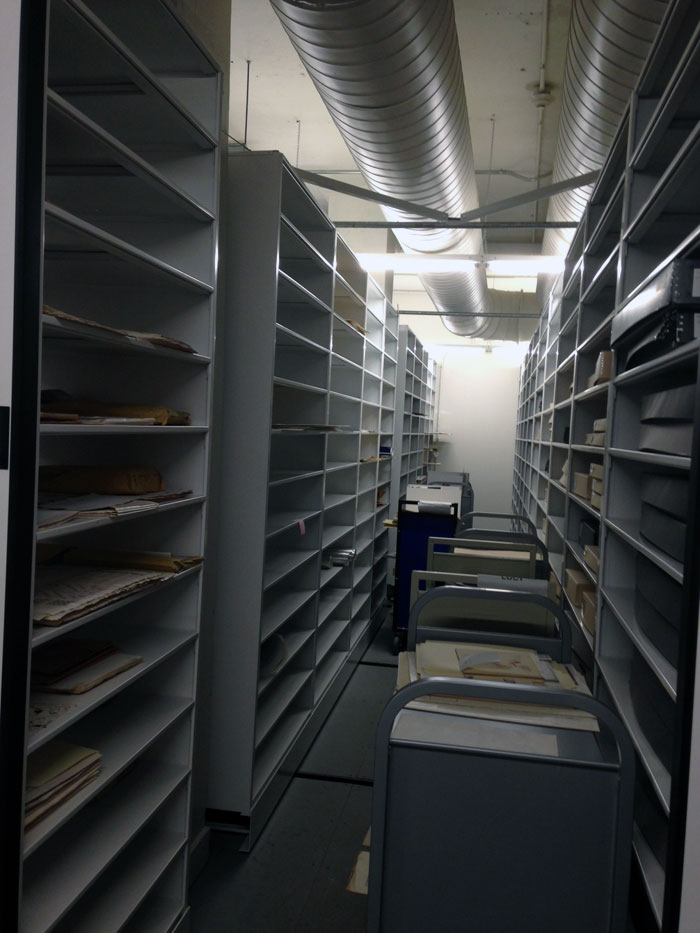 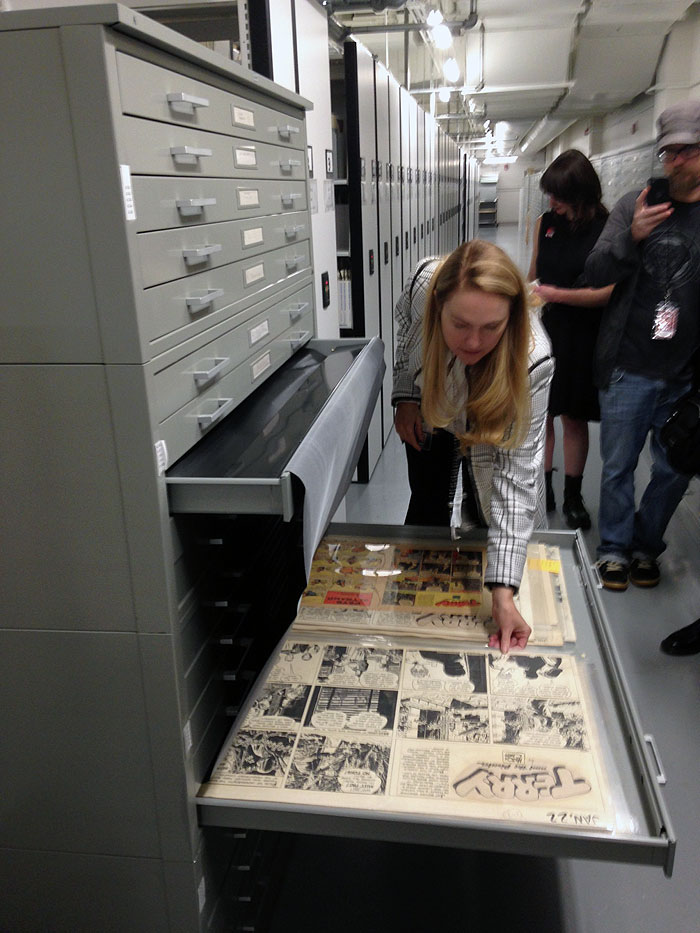 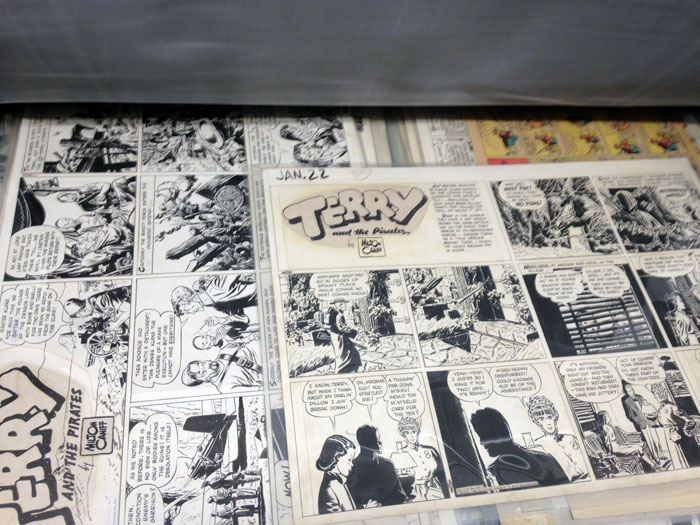 Here we see Terry and the Pirates by Milton Caniff. 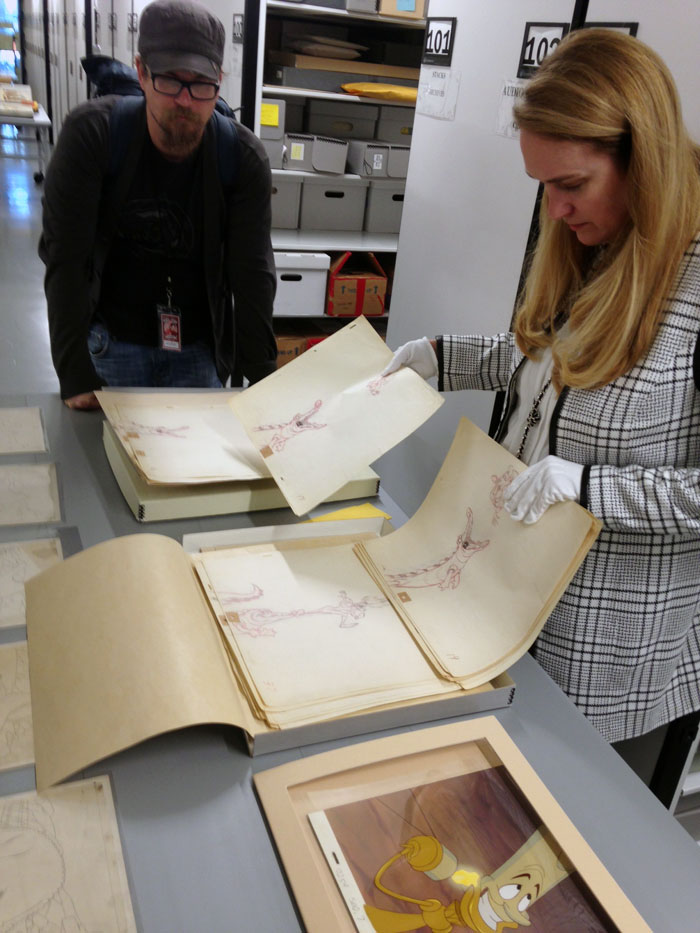 Original pencil drawings and animation cels from Disney’s “Peter Pan” and “Beauty and the Beast.” 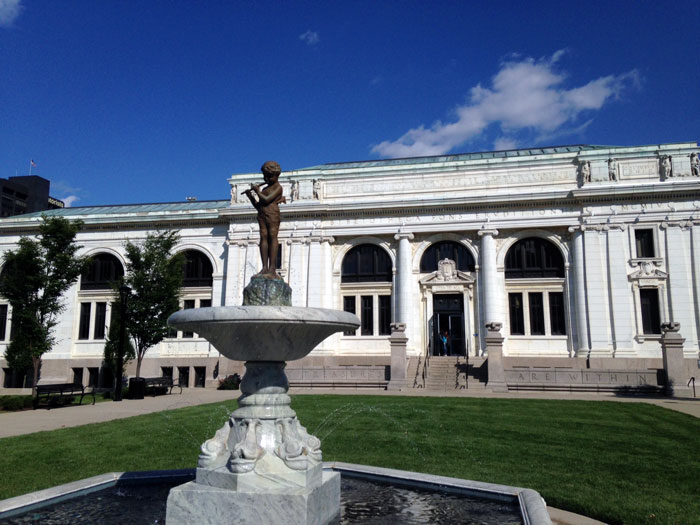 Outside the beautiful Wexner Center at Ohio State University. 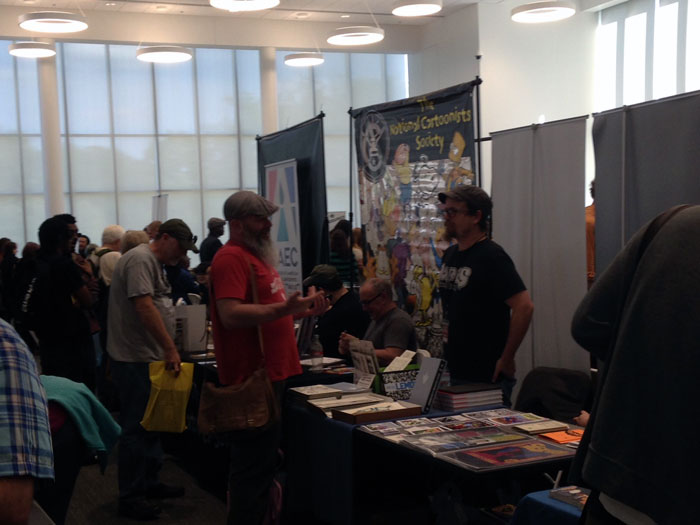 An area set aside in the Wexner Center for visiting artists to show and sell their work. 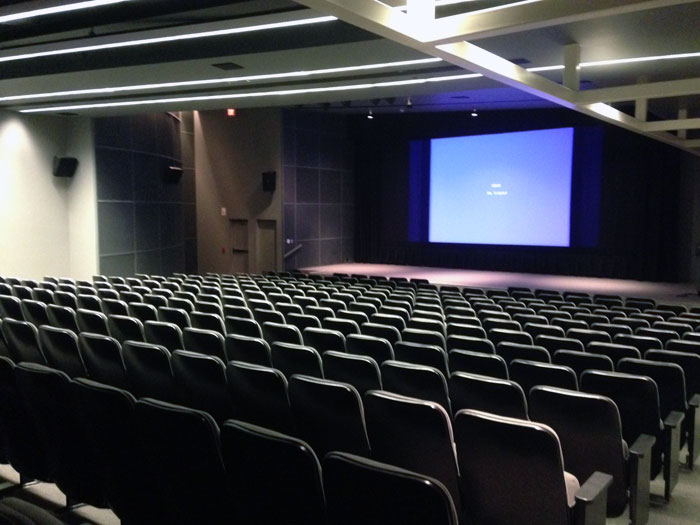 The theatre where I gave my presentation on September 28.

When I do my talks I ask for an overhead projector. This is now an out of date device, and if one can be found, it often needs cleaning and repairs! What they produced for me at the Wexner Center was an electronic document projector.

Because I use acetate sheets when I talk, the light reflecting from the surface of the projection table caused a bit of a problem. The tech guy and I played around with various lighting changes, and finally, I gave up and agreed to work on paper. This worked well unless I was using the transparencies and then the glare came back. I have to use acetate sheets to produce some of the effects I need, so if the old tried and true overhead projector is now an antique–too old and troublesome to drag onto a stage– perhaps I am too! In fact, that was my thinking after the Wexner Center presentation, even though it went well and the audience was great, I began to think that I have done enough of these comedy talks and should move on. Like the strip, I’ve decided to quit while I’m still doing a fairly good job! 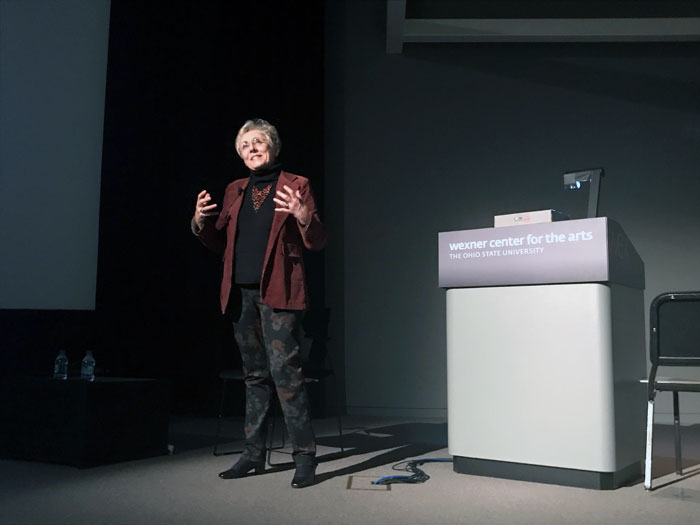 After the chalk talk, I had a great interview with Jessica Campbell, a prolific cartoonist and writer who asked some creative questions. I like these kinds of encounters. Interviews make me think, make the event spontaneous and colourful…and if it bombs, there is someone else to share the embarrassment. 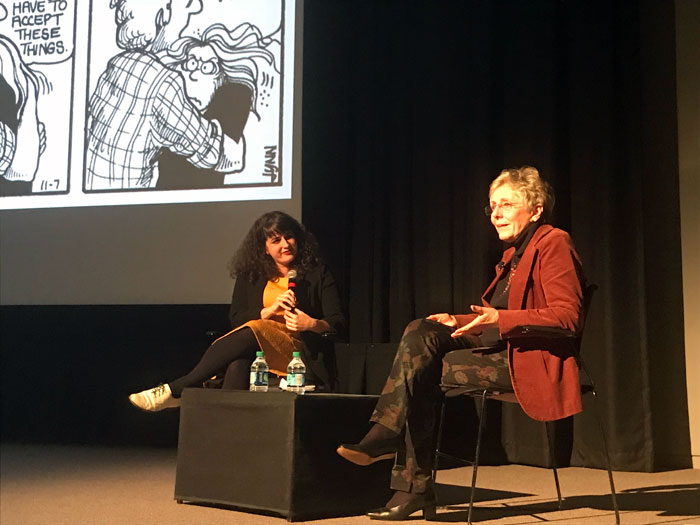 During our interview, the large screen behind us showed comic strips I had done over the years. They covered the growth of the main characters in FBorFW and some of the most controversial stories. I was surprised by the strip choices Jessica had made. Her interest in my work and her sincere curiosity was an honour. It isn’t until after an event like this is over that I realize how fortunate I am to have this kind of support from other artists. 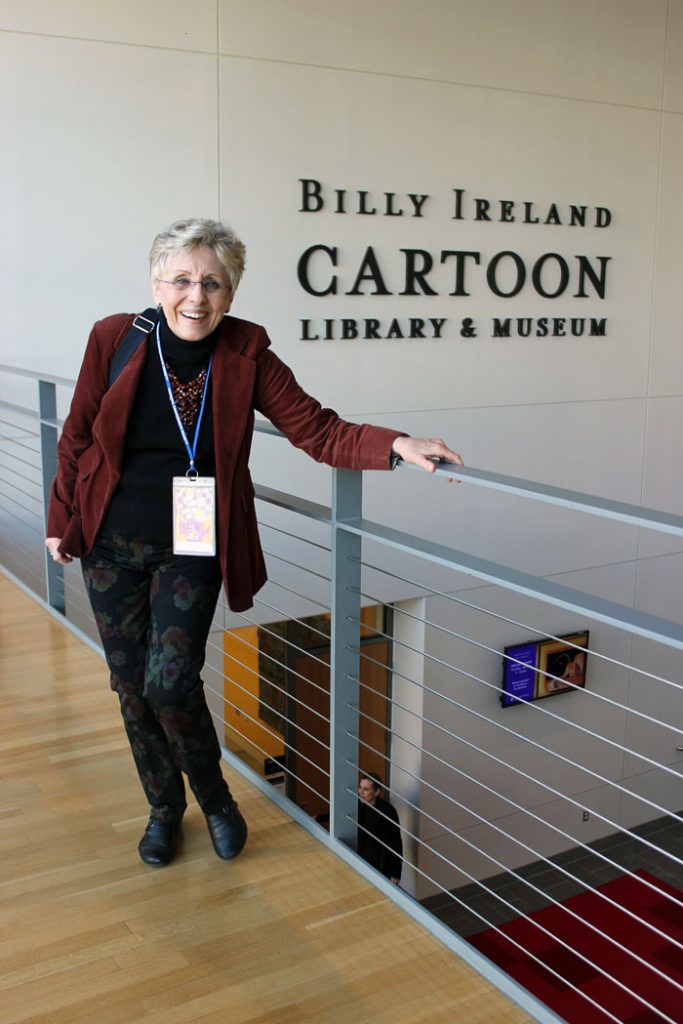 Standing on the landing overlooking the main entrance to the Billy Ireland Comic Art Museum.

I was in Columbus, Ohio for three days. After the talk and the panel, I had time to walk about the campus and then see a bit of the city. Like all other larger cities, Columbus is growing and changing–adding new infrastructure above and below the streets. Even so, it’s a most livable place–leafy and green with grand old buildings and well cared-for parks. It’s a city where a family can enjoy safe and attractive surroundings, and that feeling gave me comfort as I headed for the airport.

The radio in the cab was tuned to the political conundrum of the day, and both the driver and I listened with obvious anxiety. I had been talking to political cartoonists at the museum who told me that they were tired of the subject matter, tired of the circus. Everyone is just tired. I have wonderful friends in the United States and I have always enjoyed my time there, but after a busy and rewarding few days in Ohio, I was happy to be heading home to Canada.

My next speaking engagement will be in Collingwood Ontario….and I think it may be my last.