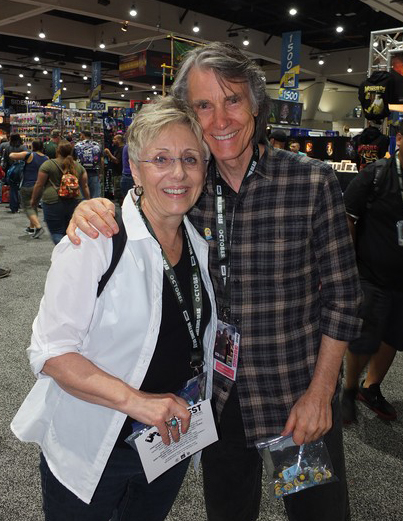 Greg Evans recently sent us this great photo of him and Lynn, taken at this summer’s San Diego Comic Con. We asked Lynn about their friendship:

Greg Evans and I have known each other for almost 35 years. Since we were both doing family comic strips, we had an immediate connection — and since any rivalry was between the syndicates and not between us, we became good friends as well. I was always intrigued by Greg’s ability to see so clearly through the eyes of a teenage girl, but his close relationship with his wife Betty (whom he has known since college) is part of his amazing skill.

Luann, Greg’s signature character, remained the same age for many years, but the pending maturity of his artist daughter, Karen, might have encouraged him to allow Luann to mature a bit, too. Karen now works with Greg on the strip, which is great fun for both of them. Greg is a prolific cartoonist with many other creative skills. He has also written, produced, and directed a “Luann” musical comedy. Our recent re-connection at Comic Con was a real treat. Now that I too live on the west coast, I hope we can get together more often!

A little about Greg and Greg’s strip:

LUANN is about the trials of becoming a young adult: the hilarity and drama, triumphs and flops, friendships and rivalries. Rich in character and intriguing “what’ll happen next?!” stories, LUANN is a compelling saga of life’s most volatile stage. Greg Evans was voted Outstanding Cartoonist of the Year in 2003 by the National Cartoonists Society