Earlier this year, Lynn was invited to contribute to Dick Tracy, by having Michael appear in a cameo at Junior’s book signing. Here’s the strip, and a note from Lynn about the honour of being asked:

I discovered Dick Tracy when I was young, so I was excited to be invited to draw Michael in a “cameo” appearance.

It’s times like these when, on the comics page, cartoon characters really do “come to life”. They exist in their own surreal realm, which is why they are ageless and timeless, and relevant to readers of all ages.

I will always think of the FBorFW characters as being “alive” no matter what stage of development I draw them in. As soon as I touch pen to paper, there they are.

Having Michael interact with characters in Dick Tracy is as easy as walking next door to see a friend! This collaboration was a lot of fun. 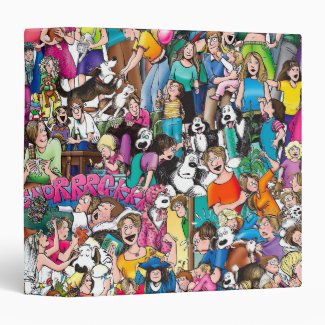 "The Patterson Family" Binder
by fborfw