Started a couple months ago, our Deep Dive feature has proven to be a hit. Here are a few more things we found in our archive, with some notes from Lynn on what they’re all about! 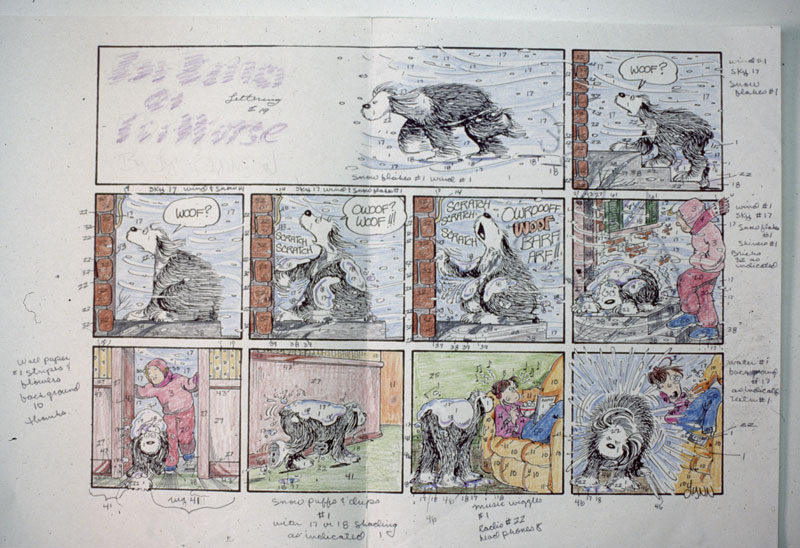 When the Sunday pages were coloured by “American Colour” in Buffalo NY, We had to send their colourists a photocopy of the original art, hand-coloured and numbered according to the colour chart they supplied us. This was quite a process, but at the time, we were excited to be able to use over 100 colours (up from 64, which was up from about 10). Sending the original art to Kansas City, and the colour rough to American Colour, meant that the 8 week lead time was essential if we were going to see the strip in the newspaper on the designated date. Now, everything can be done in an instant…but the lead time for the Sunday page, according to our contract, is still 8 weeks! Go figure!

When I draw and colour a personal greeting card by hand, I always put this little bird on the back. I confess, I don’t think this is an original idea. I think I swiped it from another cartoonist, but I have no idea who or when. Maybe by default, or by “grandfathering,” I can now call it my own! 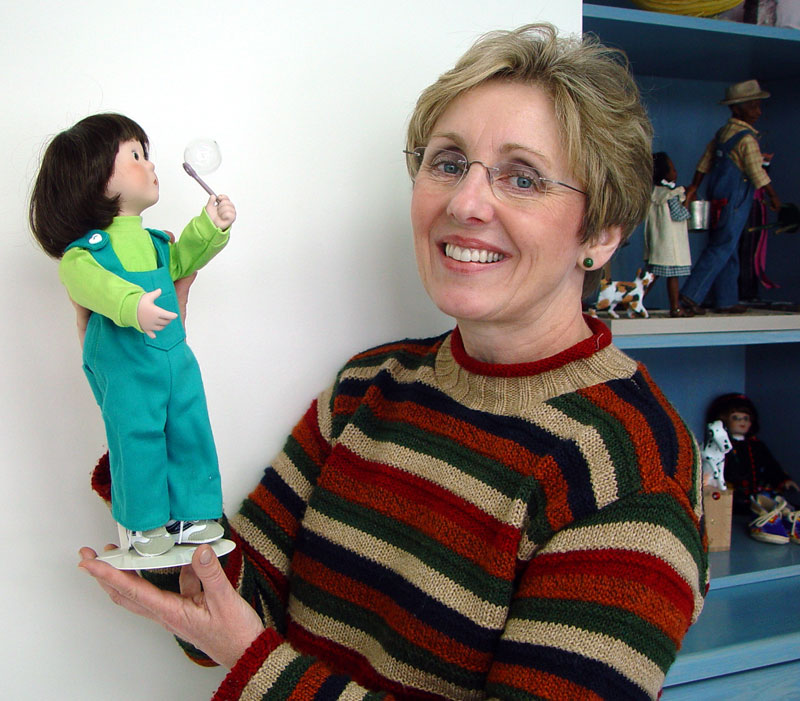 I went to a craft fair in Sudbury, one year, and met a talented doll maker, Peni Dyer, whose work I thought was perfect for a porcelain “April” doll. I had been wanting to do a 3-dimensional doll of one or all of the FBorFW kids, and at the time, April was at a perfect age in the strip. Peni, bless her sweet heart, said she could produce 100 dolls for me!

I wanted them for gifts and samples, and to sell on the website. Together, we tried a number of different poses and outfits, and I chose this one showing April blowing a bubble. Making the doll wasn’t much of a problem, though it was far more work than Peni had imagined. The real issue was the darned bubble! If this doll had been made by a big manufacturer, the bubble would have been made out of plastic. Ours was made of glass.

There was a good glass blower in town. He worked with me to make both the bubble and the wand—and the wand had to be the exact thickness to fit into the hand of the doll! Because this was such a fiddly and breakable piece, I asked him to make a whole bunch. With packaging, artwork, extra bubbles, and storage, the cost of the doll was much more than we’d anticipated. No matter how many we sold, we would never recoup the cost! Still, Peni did a beautiful job; we had a beautiful product and everyone who owns a porcelain April blowing bubbles is very happy with her. I think we still have a few left! 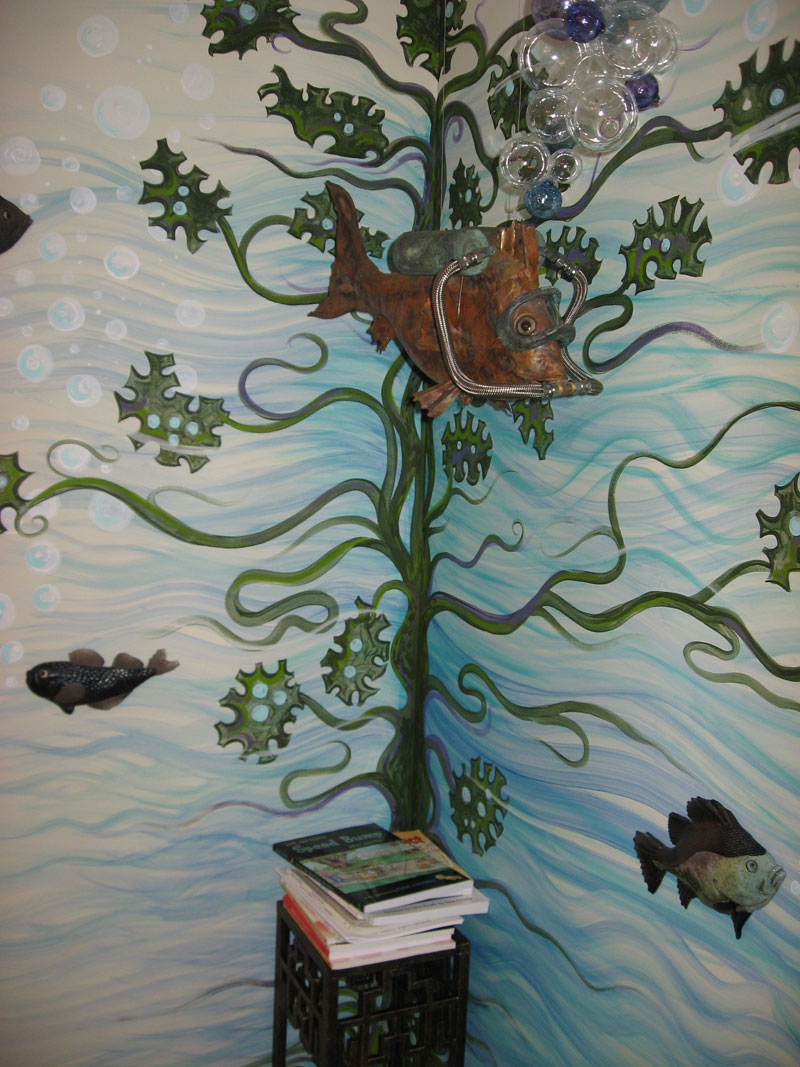 This goofy fish was hanging in a shop in Sarasota, Florida. We were there visiting Cathy Guisewite and her family, and I had to bring this big, bulky piece of art home. I knew exactly where it was going to go. The bathroom in the house where I had set up my third studio had a communal bathroom, which had no windows and was a long, odd shape. I painted an undersea scene on the end wall, bought some pottery fish to hang on the lower part of the “mural,” and my Sarasota sea guy was hung from the ceiling. I had my glassblower-friend make some bubbles, which put the final touches on what was a funny and much admired bathroom enhancement. When we moved west, I brought the metal sculpture with me. It’s in storage now waiting to find a new bathroom home in what will be my 5th studio! 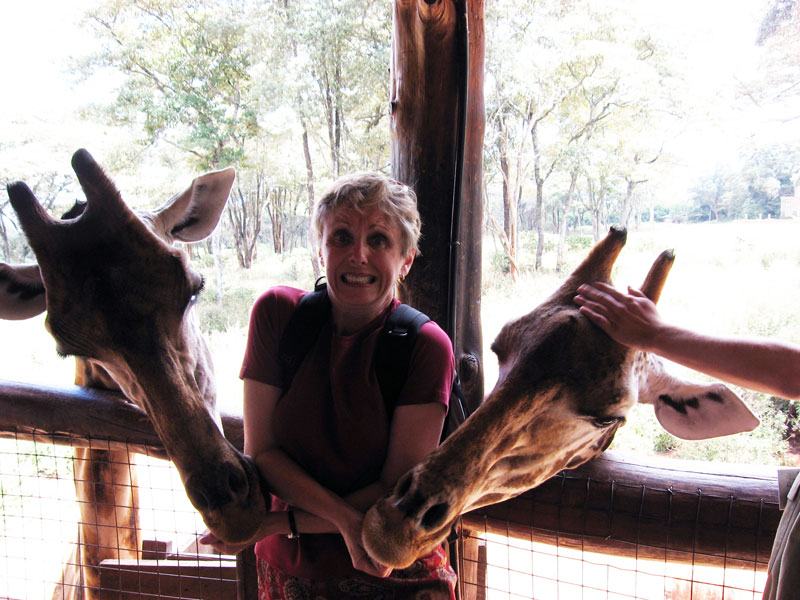 [This is from a past trip to Kenya—what were you doing in Kenya?]

In 2006, I had the pleasure of meeting Craig and Marc Kielburger who were setting up schools and working to bring fresh water into small African communities. They eventually created the phenomenon, “Me to We,” which brings young people together from all over the world. Theirs is an incredible story, and well worth looking up! I was so impressed by their work that I made a donation to their foundation. This resulted in some wonderful correspondence with them and an invitation to join them in Kenya for a tour of several of their community projects.

My daughter Katie accompanied me, and together with several other sponsors, we were taken to see some amazing sights. We took part in the building of a house, we carried water on our backs to a town that had no clean, working well—but where, thanks to the involvement of the Kielburgers and their associates, a new one was being installed. Their plan was to not only build facilities, but to maintain them as well. We saw schools where there had been none. We met with women leaders who were working to change the custom of female genital mutilation,and who, with the introduction of “micro loans,” were able to set up their own small businesses.

One vivid memory I have is of sitting in a bus with seven or eight of these wonderful women (I was the only North American), and pounding along an impossibly rutted road to a Maasai village. Everyone sings in Kenya, and they were soon singing songs in 4-part harmony. Even though I didn’t know what the words meant, the choruses were repetitive and they encouraged me to sing along. So there I was, right in there, singing at the top of my lungs with women whose lives and language couldn’t have been more different from my own. It was heaven. If I am ever given the chance to live moments in my life over again, this would be one of them.

We stayed in beautiful compounds, in tents, hostels, and even a treehouse. Of course, we were all treated to a “Safari” out on the Mara—a huge, protected national park where, from the safety of open military style Jeeps, you really do see animals living in the wild. Because tourists all want to see animals close enough to touch, there are places where giraffes, for example are accustomed to people and it’s safe to reach out and feed them. In this photo, I have run out of giraffe food and am hoping not to lose a few fingers! Truly, the trip to Kenya was a lifetime highlight and I will always be grateful to Craig and Marc for inviting us along.

[Any thoughts about moving back to Vancouver? Are you loving it?]

Moving back to Vancouver has been one of the best ideas I’ve ever had. So convinced was I that I would be staying in North Bay, Ontario, I had bought a burial plot in the Callander cemetery. Still, every time I came back to BC, I’d get off the plane in Vancouver, look at the mountains and the sea, and wish I was back home again. Moving didn’t seem to be an option. My daughter had moved to Corbeil, where I lived. When she married a west-coaster, he agreed to move to Ontario, and immediately adapted to the outdoor life of a hunter/fisherman. Their children were born in North Bay.

Ours was an ideal situation. We all lived on Trout Lake, within a 5-minute walk from each other, and could swim to each others’ docks. We worked together. Life was set. Then, there was a strange turn of events. We went to Mexico for a short getaway. It was -40 in Ontario, and as the kids slept, we talked about not wanting to go back to that freezing cold winter. Jokingly, I said, “Well, why don’t we all just pack up and move back to Vancouver?” We laughed. Then we didn’t.

I was retired. Staff who had worked full-time for me had gone on to other things. The two wonderful people who do the colouring and the website agreed that they could work from a distance. Our discussion about leaving was in March 2015. By September, we had sold our houses, moved west and were settled in Vancouver. We were home again, but everything, of course, had changed. It’s taken us time to adjust and to reconnect with friends and family. We now have a dentist, doctor, optical folks, daycare, and great guys who can build and fix stuff for us.

I lived in Kate and Lane’s basement for 6 months before finding a small townhouse, and surprisingly, it’s on the same street where I grew up. Now THAT is definitely coming home! I am happily partnered with a man I’ve known since grade 5. Paul is a professional guitarist whose specialty is Brazilian jazz. Music is now a big part of my life as well.

Katie and I have invested in a new office space, which is a 10-minute walk down the hill from where I live, and we will soon be able to move in. I am looking forward to having a studio space again where I can leave paints and canvases lying about and not worry about messing up the floors! Am I happy? I don’t think I have ever been happier. Rarely an evening goes by that I don’t look out over the harbour at the Vancouver city lights and feel grateful. I’m grateful for too many things to list here.