As part of our on-going blog series, we’ve been asking Lynn some interview questions. Our most recent query was, “How did you meet Phyllis Diller?”

I met Phyllis Diller when she came, as a guest, to open the newly refurbished Capitol Centre in North Bay, Ontario, in 1997. She arrived with a chaperone, and with a small suitcase for her wig and wardrobe.

I left a small bouquet of flowers in her dressing room, along with some refreshments and a copy of her book, which I asked her to sign. Having waited in green rooms a few times, I knew a few presents would be welcome. I didn’t expect to actually meet her, so I left a letter telling her how much her work meant to me, and how much I admired her talent as a writer and performer. I even had the cheek to leave her one of my books, autographed to her.

Phyllis did a wonderful performance. She was over 80 years old, and still delivering a wildly funny–and entirely original–live stand-up show. Afterwards, we all expected her to retire to her hotel, but she graciously came to the reception room upstairs, to meet the staff and some of the audience. She sought me out. She knew my work!

I was flattered and giddy with excitement. I couldn’t believe I was talking to someone I so admired. She eagerly shook hands with everyone, congratulated the general manager and her staff on their outstanding renovation of the theatre, and before she was too tired, she asked me to talk to her privately. She wanted to tell me that she knew my friend Mike Peters well. Mike does “Mother Goose and Grimm.” Phyllis and Mike’s mother had done a radio show together in Dayton, Ohio, when they were young mothers. Mike had been “part of her family” for years! Mike Peters and his wife, Marian, are good friends of mine, and with that connection made, Phyllis invited me to visit her the next time I was in Los Angeles. I told her to be careful about such invitations, because I would take her up on it. And, I did.

Over the years, I visited her several times, went to dinner with her, met some of her longtime friends in comedy, and got to know her as a friend. I found her to be genuine, compassionate, brilliant, forthright, and angry. She had seen some truly difficult times, both privately and professionally. I’d read her books, and didn’t need to ask why she was so defiant and strongly opinionated.

She was also spontaneously funny, with a generosity that allowed other funny people to come in, too, and be part of the repartee. Verbally sparring with Phyllis took courage, but once I was in her circle, I was OK. Anyone who has bureau drawers filled with jokes–her own jokes–is a formidable comedy partner when the martinis come out. To have joked with, laughed with, and had advice from Phyllis Diller, makes me one of the lucky ones.

There are millions of people whose lives are steeped in comedy. How do they do it, where does it come from, and how can you find more? Some people live on the periphery of stand-up, imagining themselves able to perform that most perilous craft. I am one of those people. I will never take for granted the honour and the joy it was to have been part of Phyllis Diller’s circle of friends. I was a new friend, but she cared for me. I meant something to her. You can’t get much closer to heaven than that! 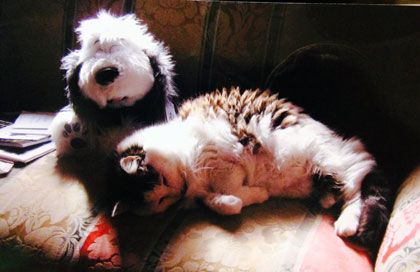 A picture of Phyllis’ cat, snuggling with the plush Farley doll that was a gift from Lynn.