I have just returned from Comic Con in San Diego. I was invited to be a speaker this year, and to sit on a couple of panels. It was great to play the role of cartoonist again! Even though I continue to draw and create funny designs and patterns, I miss spending time with friends who are still doing the dailies and Sundays; still working to deadline. I miss being one of them! Having said that, I don’t wish to return to the work I did for so long. The fact that FBorFW is still remembered so fondly fills me up and makes me proud of the work I’ve done. It’s a great feeling.

The first time I went to this unconventional convention, it was a relatively small gathering of cartoonists who wanted to share their work, have their folios reviewed, buy and sell stuff, and drink beer. We all walked from table to table, enjoying new ideas, seeing how artists drew and coloured — all before the magic of computers. This was magic on its own! You could see the entire exhibition floor in less than a day and I don’t remember anyone wearing costumes.

Today, the “Con” attracts tens of thousands. There is no age limit. Everyone, from the new kid in a carrier, to granny with a cane, is there– along with hordes of twenty-somethings who line up for hours, some sleeping on sidewalks in the hopes of scoring tickets to an event, a talk, or a workshop. People are friendly. People are reunited, and new friends are made. It is a seething, bustling, colourful crush of fans and foragers. Many people come in costume, looking for headgear and hardware, buying everything from space suits to makeup — whatever it takes to become a superhero. Whatever you can dream up, you can be.

The convention hall is shaped like a massive cruise ship. Each day it took at least half an hour to work my way through the comic book stands, graphic novels, animation exhibits, and original art to wherever I needed to go. Fortunately, I had a volunteer guide who took me directly to meeting rooms and signing tables or I’d have been lost! Everywhere, I was greeted by folks who read my work as children and were now reading it to kids of their own. They would appear and then dissolve again into the dense river of people. I was grateful to sit in the National Cartoonists Society  booth with Greg Evans, Maria Schriver, Steve McGarry and crew, safe and out of the way. I also spent time behind the desk at IDW publishing, signing the new collection books. Having somewhere to be, somewhere to stand, made the massive crowd easier to manage. Moving bumper to bumper with aliens, robots, rubber chickens, and the undead, is wonderful — but in small doses. 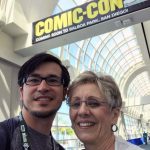 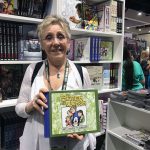 Lynn holds a copy of her new treasury book. 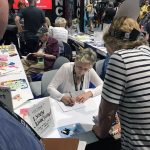 Lynn at one of many book signings. 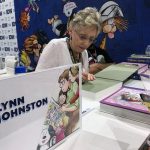 Signing copies of her books.

It’s over for another year. I’m home again, looking at photos and sending messages to folks I met. It was four days of fun and freedom; of harmless fantasy in a celebration of comic art at its best. At a time when the world outside seems stark raving mad, I’m grateful for the kind of craziness that brings people together in spirit and solidarity. That’s Comic Con.