It’s hard to believe that 25 years have passed since “Lawrence came out“. That’s what we have come to call the episode in FBorFW, when Michael Patterson’s lifelong friend and next door neighbour told Mike he was gay.

I wanted to write this story, in 1993, because I had just lost a dear friend, who was murdered for his bicycle and his stereo–and his death rocked my soul. Michael B. was someone I had grown up with. We went to the same school, were in the drama and art clubs, and we met often after school to listen to the “Goon Show” in his mom’s living room. He had all the shows on vinyl; a real treasure! We lived for comedy, and were often in trouble for taking our “stand-up” routines too far.

After grad, Michael and his partner, Paul, moved to Toronto where they did stand-up comedy and eventually wrote for CBC radio. I moved to Ontario around the same time, and we stayed in touch. I saw them perform in gay bars, Yuk-Yuks, and at the Firehall. They introduced me to musicians like Stan Rogers, and comedians like Robin Williams and Martin Short. We expected we would know each other forever.

One day, a thought about Michael came into my head suddenly, with a rush and a smile. It had been years since I’d seen him. I was standing in my kitchen in North Bay Ontario, having moved and remarried. I had two children, and a busy job with the syndicate. I spontaneously called his number, but there was no answer. I called his partner, Paul, and there was an eerie silence on the line. When Paul could speak, he told me he had just learned that Michael had been murdered in his apartment, by a young man he had met on the street that day. The man was homeless and had asked for money. Michael gave him forty dollars to get food, and a place to stay for the night.

The young man followed Michael home. He then bought a knife with the forty dollars, went back to Michael’s apartment and slit his throat. He was soon found, riding Michael’s bicycle and carrying his stereo. According to Paul, the attitude of the police was “Well, there’s another one off the streets!” — referring to Michael, who was gay and was assumed to be preying on homeless boys. He had been an artist, actor, writer and comedian, but Michael now became recast by the police as a predator who deserved to die. This was Paul’s observation. Paul tried in every way he could to get justice for Michael, and to have his killer put on trial for murder. It never happened. Paul died three years later, and I’m sure it was from a broken heart. I knew them both so well. Both gave to the world. They gave with their talent and their wit, their kindness and their generosity. Neither one “deserved” to die.

When this happened, I had been doing the comic strip for some time and it was beginning to look like a “saga”; something which reflected many facets of normal family life. If I was going to be true to my own life, then one of the characters would have to be, quite naturally, gay or trans — or somewhere in the rainbow zone! I thought about Michael B and I said “Well, my friend, this is for you”. I asked my editor what he thought about taking the story in this direction, and he was encouraging.

The character in the strip who seemed like the best choice to reveal his secret to Michael Patterson (who was named after my son, Aaron Michael, who was named for my friend, Michael) was Lawrence Poirier. His character had been quietly developing. He was funny and smart, introspective, diplomatic, romantic, athletic, and outwardly kind. There was something exceptional about him, and knowing he could handle it, I chose Lawrence to be “that boy.”

The story was discreetly handled, well written, and thoughtfully drawn. It had to be. My editors said I’d lose papers, but it was a good story; they said it was coming out at the right time. Readers were ready. Six weeks before the publication date, we gave the newspapers advance warning and we offered them alternate material, if they didn’t wish to run the story. Many features editors overlooked the warning — and ran the story without reading it. Larger papers like the Chicago Tribune and the Los Angeles Times ran the story, looking forward to the inevitable discussions that would follow. Editors of smaller rural papers decided to run it, because it was controversial but appropriate. So many different papers, all in different markets with different readerships, ran the story.

At home and at the syndicate, we kept in touch with newspaper editors and waited for the story to run. What I had in my corner, along with my friend Michael’s sad story, was the help and support of family and friends who were gay; people I had interviewed, people of whom I has asked permission. All were happy to help, all were enthusiastic and hopeful. I had support from people who, when I asked what it was like to come out, had said “It was a relief!”

The Lawrence story ran for about four weeks. My phone didn’t stop ringing. From seven in the morning until midnight, I talked to editors, publishers, reporters, interviewers from radio and TV. Letters came in huge boxes from the post office and the syndicate. Some of the editors I talked to were furious. Having not read the advance information, they felt they had been blindsided. They cancelled my strip. As one paper cancelled, another would pick it up. I lost maybe 45 papers, and picked up about 50. The controversy waged on as if there had been some kind of national disaster. Neither my editors nor I could have predicted the response.

Over three thousand letters arrived at my home. I answered all that were reasonable; many were threatening and frightening. Many came from people who had no idea who I was, or why I had done the story. They wanted me dead anyway! There were times I regretted having published the series, but that was offset by knowing that what I had done was nothing compared to the work done by those who had literally put their lives at risk. I could see firsthand why things are so slow to change.

In the end, it was a very good thing. Over 70% of the letters were positive. Editors agreed that they were pleased with the controversy, and that the story had ended with thought and dignity. And why not! Lawrence is the kid next door. Lawrence is my high school chum who wrote comedy for the CBC. It was a good time to release a story that–in or out of the closet, belongs to us all.

One of the best things to happen throughout the story’s release was the interaction between parents and children, who were using the comics page to reconnect, to discuss a taboo subject, something that had torn them all apart. I have a letter here that I’d like to share with you. It’s from an intelligent and remarkable young man, whose personal story impressed me greatly. His message is a gift. I wish I could have sent him a reply. 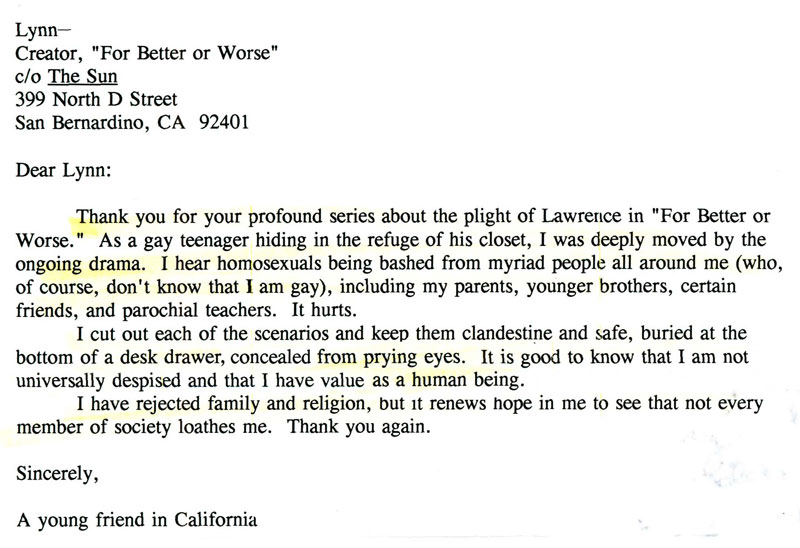 I am wondering, now, what has changed. In today’s enlightened and much more accepting world, are people who identify as LGBTQ finding their lives easier, is the world less hostile, less restrictive, less biased? Have we come far enough? Are enough intelligent people now realizing that there is no definite sexual polarity, that we come in all shapes, colours, sizes, and sexual orientations? Is it safer out there? Are there more jobs available? More places in society? I’m hoping that folks who know about this will contact us and tell us what their experience has been now that North American culture identifies itself as diverse and aware.

FBorFW was never intended as a forum. It was always a comic strip: a space in the paper that provided a smile and a bit of personal honesty. In having created this small inside look at a normal Canadian (and therefore a normal North American) family, I also created a safe place for people to express themselves. When readers wrote to me, I wrote back. For those whose letters came from the heart, respectfully and with honest opinions, I responded with consideration and concern. I have lost too many dear friends to AIDS and alienation. Now that 25 years have gone by, did the Lawrence story make a difference? Has your life improved? Please let me know. Let me know that my friend, Michael, didn’t leave this earth without a legacy.