When I was a kid here on the North Shore, my dad would take me to the Pow Wow down on the reserve. It was always fun and full of activity, and the drumming seemed to go from the air to the ground, up through my feet and right to my soul. We would eat bannock and smoked salmon, and Dad would talk to the elders—many of whom he knew quite well. For many years, he owned a small watch repair shop on Lower Lonsdale, and after awhile he began to buy local crafts and carvings from the artists on the reserve. This meant long chats over cups of coffee. Dad was well liked; he gave a fair price and often told an artist to charge more! Some of these treasures he sold, but many he kept and he left them to me when he died.

Years later, when I was living in Northern Ontario, I’d go to the annual Pow Wow, which was held in September. The Anishinabek Pow Wow grounds on Lake Nipissing (just outside North Bay, Ontario) is a beautiful treed sanctuary. It’s been a peaceful and protected space for a very long time, and when it’s transformed into this annual celebration, it is a colourful, welcoming and exciting place to be. When I left the area, I knew it was a place and a tradition I was going to miss.

Last week, I saw a notice for the local Squamish Nation Pow Wow, and I thought it would be a good idea to take my 5 year old granddaughter. She loves to dance and sing, and if my dad had been here, he’d have said it was time.

The North Vancouver Pow Wow is held in an open field not far from the base of the Lion’s Gate Bridge. On one side of the field, there is a long, wooden lodge building and several large totem poles stand nearby. The Pow Wow was to last 3 days. I chose to take Laura on Saturday, and we arrived at 6:00pm in time to grab a burger and look around before the dancers’ grand entrance at 7:00. I told Laura to look for something special as we walked around the many craft tables set in a large circle around the field. I also wanted to go where the dancers were sitting, so I could meet them and have an up close look at their regalia. When they are in motion, they are a whirling flash of colour and it’s hard to appreciate the wonderful craftsmanship that goes into each outfit. I also like to watch the drummers as they hit the drums hard and sing in unison. 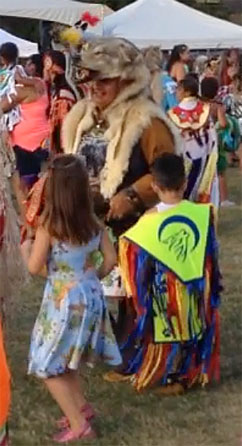 Laura found a beaded hair ornament in one of the craft tents, and after some more looking around, we decided to go back and buy it. The man in the tent was dressed in an outstanding traditional robe of wolf skin—the head of which was mounted over his own. His face was painted, and in any other encounter, he would have looked quite fierce, but he smiled at Laura, told her the hair ornament would be two dollars and handed it to her with a grandfatherly gesture that made us both smile.

With some fanfare, the grand entrance was announced. Dancers of all ages and in all manner of traditional dress lined up at the entrance and prepared to parade into the centre of the field. The drumming and singing began, and Laura wanted to get into a place where she could best see what was going on. Elders were introduced followed by mothers and children. Then warriors and visitors whirled in a mass of colour into the centre of the field. Some of the dancers were from Ontario, and I wondered if I’d recognize anyone I knew. There were women and girls in jingle dresses, grass dancers, ribbon dresses, amazingly ornate beaded robes, and the some of the most spectacular and colourful feathered regalia I have ever seen. After elders had spoken and announcements were made, the dancing truly began.

I wondered how long Laura would want to stay and watch the festivities. I could watch all night! After awhile, I asked if she’d like to get down from the stands and see if we could get a closer look. People were kind and we made our way to the side of the circle where we could see the dancers up close as they moved clockwise to the drums. Laura began to sway with the rhythm, and when it was announced that anyone who wanted to join the dancers was welcome to do so, Laura’s eyes lit up. Like someone preparing to jump into skipping ropes, I watched her get up her courage, set her pace and go. She ran right to the man in the wolf robe and danced along with him. Laura whirled around the circle twice, and when the drums paused, she ran back to me happy, smiling and completely out of breath. “I know some of the kids!” she said, “they go to my school!” At Ridgeway Elementary School, First Nations teachers talk to the children about history and drumming and traditional dress. Laura is learning about hunting, fishing, healing plants and some of the things that happened when the settlers came. She has even learned a little about residential schools. Taking her to the Pow Wow wasn’t an introduction, it was adding to something about which she already knew. Maybe my dad has returned in the spirit of my granddaughter. It’s possible! He certainly resides in me.

If there is a Pow Wow in your area, treat yourself. It’s a wonderful experience.

One of the people I met at the Pow Wow in North Vancouver was William Burnstick. The regalia he was wearing exemplifies the intricate and colourful bead and feather work seen at these annual celebrations. To see his work, go to www.WilliamBurnstick.com  His artistry is outstanding!