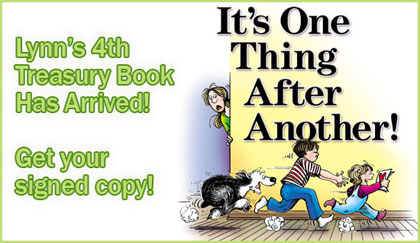 Our latest Treasury book “It’s One Thing After Another” has just been released — and I have proof: A box arrived on Friday, warm off the press!  It looks good, I’ve signed a few…but I have to tell you that it’s smaller, again, than the first two. This is because the cost of producing the first two was astronomical and higher shipping prices, as well, made the weight and size difficult to justify. What my editors and publisher suggested is that the size of the book be cut in half – so we now have two large treasuries and two half the size: four in all.

It’s distressing for us, too, to have to charge the same for these new smaller books, but the reality is – if we are going to continue them, we have no choice. There was some talk of discontinuing this series of books altogether — but I didn’t want to stop partway into the project. I think a book on a shelf that is one-off, with no sequels, is called a “widow”. We would have had four of them.

I proposed to Andrews McMeel that we continue work on the fifth treasury and ones thereafter, with our company taking the risk – no advance: we’ll do the work if they’ll help with marketing and distribution…and this suggestion was graciously accepted. As long as we can cover our expenses, it’s worth it to us to carry on.

I used to collect cartoon books by artists I admired, and was always miffed to find that a book I had just purchased was really previously published work in a different format and under a different title. It was material I already owned, and I thought it unfair to ask readers to pay for the same thing twice. With this in mind, I wanted these FBorFW treasuries to be full of new material — I wanted to really answer the question most asked: “Where do the ideas come from?”

By telling you what adventures, observations and family secrets inspired many of the daily and Sunday panels, I could also tell you a lot about myself. This is a pretty arrogant thing to say, I know – but I was once asked to write an autobiography, and even though I had enough material, the thought was daunting. Still, there are some wonderful adventures and some heartfelt stories I could tell! For example, I have been lucky to have lived in three very different Canadian provinces.

In the north, I learned to fly a plane, I experienced life in isolated First Nations villages, volunteered as a spotter with Search and Rescue. I’ve been down into a mine in gear and helmet, I’ve been out on a trap line. I’ve lived on a farm where I learned how to drive machinery, build grain bins and feed pigs. I learned that an endless sky is the thing that anchors one to the prairies as much as the wealth of the land itself — and that people everywhere are wonderful.

I’ve worked with the Medical missionaries in Honduras and Peru. All this stuff has appeared in the strip in one way or another and if I could tell you these stories by relating them to the work I did then I could explain how the various stories evolved and in so doing be able to relive it all again!

These treasury collections are going to be a lot of work. We live in a rural area in Northern Ontario. Kevin Strang, my long suffering graphic designer, is a 20 minute drive down the road in one direction and my wonderful web designer, Stephanie, lives 20 minutes down the road in the other direction. My daughter Katie lives around the corner — a five minute walk away.   Katie has just had her second baby — so we will be working around feeding schedules and crayon on the walls.

Putting these books together is going to take time and teamwork, but we will produce these books with as much speed as possible! Already we have started to pull the materials for book 5, but a title has yet to be decided and a publication date will depend on when we can get everything to the publisher. We were hoping to have something ready for this Christmas, but it’s hard to hit a target when you haven’t loaded the gun! We’ll keep you posted, and perhaps we’ll put some excerpts on the site!

Meanwhile, “It’s One Thing After Another” is here in the studio and ready to send out. Please let me personalize one for you!