The last week of August saw me heading north. I had agreed to do a “chalk talk” at the tiny Globe theatre in Atlin, BC – just south of the Yukon border. The flight to Whitehorse on Air North was pleasant as always – one of the few airlines which treats passengers with courtesy and appreciation. There is no charge for checked luggage, you get a nice lunch and at the end of the trip, they bring you a warm chocolate chip cookie! I always sit in a window seat. The scenery along the B.C. coast is spectacular and must be seen from above if possible. 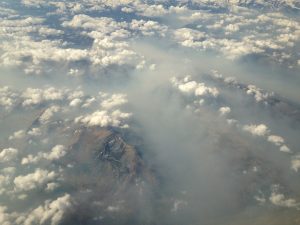 Forest fires were raging again, and the result could be seen from 30 thousand feet above the ground. I took some pictures to show that smoke filled the valleys. It came up to the mountain crests. No wonder people were evacuating to safer and clearer areas; the air was bad. Paul (my partner) picked me up at the airport. It was a cool, clear day and compared to the dry heat of the city, it felt like fall.

After a fast trip to Skagway to see friends, we returned to Atlin and Paul’s tiny log cabin. It’s a cozy space nestled in the woods. He built it by hand when he was in his 20s and he says the land is in his DNA. I love being back in the north. When I was a kid and just leaving home, I wanted to stay in the city, be an animator or go into advertising. Like all city kids, I thought the north and the prairies were off the map; no place for me. Later, when fate took my family and me to Lynn Lake Manitoba, I changed. Small towns connect you to what’s real; what’s important. You learn to do without, to create your own entertainment, to be resourceful and to depend on your friends and family. Atlin is one of these special places and it comes with scenery too beautiful to photograph. Maybe that’s why so many talented artists choose to live there. 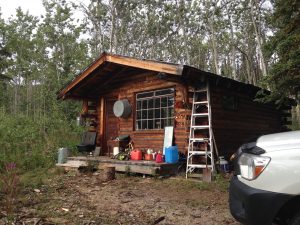 The Globe theatre, on Atlin’s main drag, was built during the Gold Rush. It has been beautifully restored and seats about 100 people. Heather, the Globe’s young and enterprising operator, had arranged a number of fundraisers in order to pay for the boiler which has to be repaired before the long winter sets in. Paul and I were the last of the “shows” and 23 people showed up. It was like a reunion as everyone knew everyone else.  Heather set the heater in the middle of the aisle to heat the place up a bit, then put on the coffee and the popcorn. She had also made Rice Krispie squares. We had an hour and a half to perform, as there was a baseball game on as well – an inter-community game which was a serious draw! Paul “opened” for me, with a few numbers on his guitar. He is a local favourite and I asked him to play something he’d never played for an audience before. I figured – if he’d roped me into this, I was going to give him a challenge in return! He played some fine original tunes – which I had only heard in part. 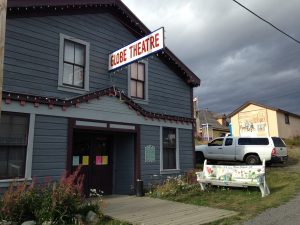 This shows the board in front of the Atlin Gas station, advertising the show. I told Heather that what I did was called a “chalk talk” and wondered how many folks would know what that meant! Not many, I’m sure – but there it was!

The chalk talk always goes well and is never the same twice. I talk about the things that go into a cartoonist’s mental rolodex: childhood memories, personal truths and lifetime adventures I want to share. I draw while I talk, using an overhead projector – a machine which is becoming harder and harder to find! I have always loved to watch my cartoonist friends draw. It’s a magical experience. With this in mind, I use the projector to illustrate my talks and it has become more than a tool, it’s kind of a “Dumbo’s Feather”. I need it to hide behind and give me the confidence I need to do public speaking! I’m still an amateur. I have learned that stand up comedy is the hardest job in the world and I’m awed by the people who do it well!

After the talk and some more visiting, Paul and I left the Yukon and began the long drive home. Every year, he likes to bring his truck back to Tsawassen where he has a cottage. I have begun to look forward to this four-day journey – for the scenery and for the experience. I love a good road trip! 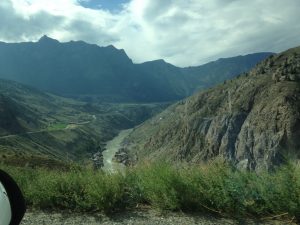 There were fewer fires. Firefighters and some much-needed rain had lessened the threat and the smoke had dissipated. We were able to see the great walls of rock, vast mountain meadows and deep winding gorges of B.C’s interior highways. We listened to “books on tape” and enjoyed staying in out-of-the-way hotels and cabins. I didn’t want the trip to end.

Visit Lynn this September at the CXC(Cartoon Crossroads Columbus) in Ohio, from September 28 – 30th.

CXC is a new city-wide festival celebrating all forms of comics, cartoons, and their creators.  Cartoonist Jeff Smith (Bone) is the Festival President and Artistic Director, and Tom Spurgeon, who runs The Comics Reporter, is CXC’s Executive Director. The Billy Ireland Cartoon Library & Museum is one of the participating organizations, along with the Wexner Center for the Arts, the Columbus Art Museum, the Columbus Metropolitan Library, the Columbus College of Art and Design, and more.

Check out the Facebook Event page here for news and details